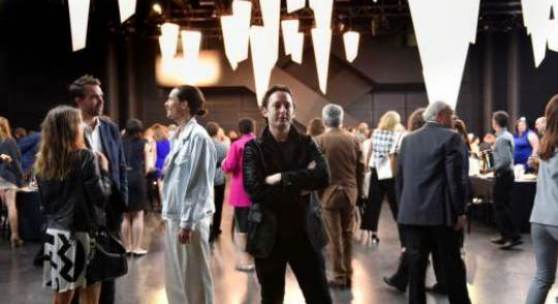 Design Miami/ Basel looks back at its most spectacular edition, with more than 50 galleries showing from around the world, record attendance and the introduction of the headline-grabbing Design At Large Program

June 25, 2014 - The ninth edition of Design Miami/ Basel, June 16-22, opened with its largest and most spectacular show to date, affirming its position as the leading global forum for collectible design. More than 50 galleries from 13 different countries presented a range of museum-quality historical pieces to newly commissioned works to record attending audiences of collectors and design enthusiasts - 26,600 visitors over 7 days. The fair also launched its newest program Design At Large curated by Creative Director of Barneys New York Dennis Freedman, and unveiled its most ambitious Design Commission Triangular Series by Jamie Zigelbaum.

“Each year, Design Miami/ Basel has exceeded its previous incarnation in every way and the June 2014 fair has been no exception; with increased visitors, an expanded floor plan, additional galleries and programming, said Executive Director Rodman Primack. “What has remained consistent throughout has been the presence of museum-quality vintage design in immediate proximity to ground breaking contemporary work, though this year we have seen particularly beautiful booth constructions. It has been a thrilling fair throughout.”

The importance of good scenography became all the more apparent with a number of galleries, such as Galerie Jacques Lacoste, opting for a tightly edited selection of works in a beautifully conceived setting. The fair also saw the growing popularity of wall-based works - of which Maria Wettergren had a number of notable examples, including the delicate lace work Here, Now by Gjertrud Hals. Marble and brass continued a strong return to favor in contemporary design works, including new works in marble by Massimiliano Locatelli at Nilufar and Aldo Bakker at Galerie Vivid. There were some unusual explorations of natural materials, including Studio Swine’s Hair Highway series at Pearl Lam Galleries that used long human hair set in natural resin as its base material. Fine craftsmanship in both wood and ceramic works continued to be popular, as seen in YMER&MALTA’s Marquetry editions.

“Design Miami/ Basel remains an important site for international discourse about design. The confluence of works from Africa, The Americas, Asia and Europe creates an opportunity for collectors to discover new passions, for critics to voice opinions and for enthusiasts to become connoisseurs. Fueling authentic and informed interest in design is truly one of the main goals of the fair,” said Alexandra Cunningham Cameron, Creative Director of Design Miami/.

Audi unveiled an architectural installation by Konstantin Grcic, inspired by the new Audi TT coupé. One of the most influential designers of our time, Grcic’s TT Pavilion installation used real elements of the Audi TT, such as the rear hatch, and was designed to be assembled and dismantled as required. Innovative Audi technology and automotive materials were combined with wooden elements to produce a structure that is at once space-aged and reassuringly familiar in design. Mounted on stilts, it could be sited in an urban landscape as well as in a natural outdoor environment. Fredrikson Stallard’s 'Prologue' - a monumental 1.2 ton steel ring set with 8,000 pear-shaped crystals commissioned by Swarovski – was a spectacular attraction. Evoking the rising sun, the 4-meter-high work was suspended from the ceiling and cast golden, color-flecked sparkles throughout the fair.

The ground floor entrance hall was dominated by this year’s Design Commission, Triangular Series, a responsive, suspended installation by Jamie Zigelbaum. Resembling icy stalactites, the suspended tetrahedral forms of the immersive installation pulsed with warm and cold light, responding to the movement of visitors through the space. The work also provided a dramatic setting for the VIP dinner hosted by Nadja Swarovski, Craig Robins and Rodman Primack on the eve of the fair.