THE PEGGY GUGGENHEIM COLLECTION welcomed over 370,000 visitors in 2012 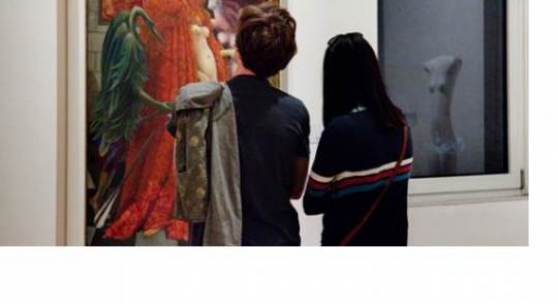 The Peggy Guggenheim Collection welcomed over 370,000 visitors in 2012. The collages of Motherwell and paintings of the fin-de-siècle avant-gardes in Paris are among the upcoming exhibitions programmed for 2013.

2012 at the Peggy Guggenheim Collection closed with 372,273 visitors recorded over 315 days of opening, an average of 1,182 visitors per day. In addition 5,888 students and 422 teachers participated in the museum’s educational programme 'A Scuola di Guggenheim', 1,500 children attended the Sunday 'Kids Day' workshops, and a further 7,500 people visited the collection for exhibition openings, special visits and institutional or private events.

Over 105,000 visitors enjoyed the popular Giuseppe Capogrossi retrospective exhibition (closed February 10) with great acclaim from critics and the press. The museum is planning a rich program of events in 2013, in Venice and further afield. This begins with Postwar. Italian Protagonists (23 February – 15 April), an exhibition curated by Luca Massimo Barbero, bringing together five post-war Italian artists: Lucio Fontana, Piero Dorazio, Enrico Castellani, Paolo Scheggi and Rodolfo Aricò, each with monographic rooms that together offer a fresh reading of Italian art of the period.

Space will be given to young people between 24 April and 6 May when Peggy’s museum will host a gigantic and colorful collective installation—the result of Kids Creative Lab, an original project uniting art and fashion and organized by the Peggy Guggenheim Collection in collaboration with OVS, one of Italy’s most leading high-street fashion retailers. This unusual, fun artwork will feature the creative efforts of primary school children from throughout Italy who participated in the project, using an 'Artist’s Kit' to construct three-dimensional forms from felt. Together these will be assembled as an outsize sculptural work that will come to life in the museum's exhibton galleries.

The summer at Palazzo Venier dei Leoni opens with the monographic exhibition dedicated to Robert Motherwell, one of the undisputed fathers of American Abstract Expressionism. Robert Motherwell: Early Collages, from 26 May through 8 September, centres on the American artist’s papiers collés, showcasing Motherwell’s little-known production of abstract collages during the 1940s and 1950s. Late May also sees the unveiling of the Hannelore B. and Rudolph B. Schulhof Collection, the Peggy Guggenheim Collection’s prestigious recent acquisition of 80 postwar American and European paintings, sculptures and works on paper, including several masterpeices, masterpieces – alongside Peggy Gugenheim's Collection of the hisotric avant-gardes and the celebrated Gianni Mattioli Collerction of erly 20th century Italian painting.

The Neo-Impressionists, Nabis and Symbolists close the year with the autumn exhibition The Avant-gardes of fin-de-siècle Paris: Signac, Bonnard, Redon and their contemporaries (29 September 2013 – 6 January 2014). This brings to Venice a rich selection of over 100 paintings and works on paper by major representatives of the late 19th century French avant-gardes, including Paul Signac, Pierre Bonnard, Félix Vallotton and Odilon Redon.

In Venice and beyond: the Peggy Guggenheim Collection also promotes its artistic patrimony with a programme of events further afield. After the success of the 2010 exhibition of Peggy Guggenheim's Collection in Perth, Australia, over 80 works from Venice are currently (through 26 February) on display for the first time in South America, in Santiago, Chile, in the exhibition Great Moderns: Peggy Guggenheim Collection, Venice. Art of the 20th Century, a celebration of American philanthropy in the history of art and collecting in the 20th century.

The annual exhibition curated by Luca Massimo Barbero for the town of Vercelli (Piedmont) celebrates its sixth edition this year with The 60s in the Guggenheim Collections: from Informel to Pop Art, to be held in the Arca space of the ex Church of San Marco, from 9 February to 12 May 2013. Vercelli welcomes over 50 works of European and American art of the 1960s by such undisputed masters as Rauschenberg, Dubuffet, Twombly and Warhol, father of Pop Art.