THE PEGGY GUGGENHEIM COLLECTION ENDS 2011 WITH OVER 400,000 VISITORS 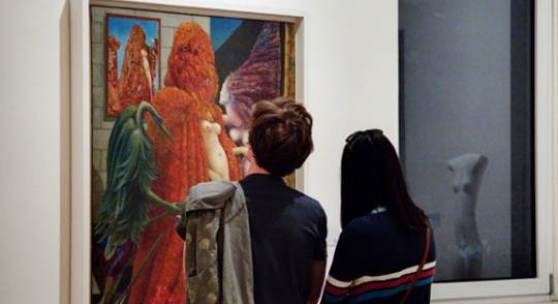 THE PEGGY GUGGENHEIM COLLECTION ENDS THE YEAR WITH OVER 400,000 VISITORS. FROM JANUARY 2012 WORK IN PROGRESS IN PALAZZO VENIER DEI LEONI AND THE NASHER SCULPTURE GARDEN

The Peggy Guggenheim Collection closed the year with an attendance total of 401,299. Visitors during museum opening times were 378,368, spread over 314 open days, averaging 1205 per day. 28,611 of these visitors were accounted for by 988 groups. “Almost 50,000 visitors more than 2010, an increase of 14%, is a very rewarding result for the museum and its staff,” commented Philip Rylands, director of the museum, “and is a source of optimism for the new year.” 5,867 students and 535 schoolteachers participated in the ‘A Scuola di Guggenheim’ educational program, and 1,710 children in the Kids Day workshops each Sunday. A further 14,819 guests participated in exhibition openings, and museum events.

From January 11 to February 19, 2012 the Peggy Guggenheim Collection will carry out extensive restoration work in Palazzo Venier dei Leoni, home of Peggy Guggenheim’s museum on the Grand Canal of Venice. The climate control system, which governs optimal levels of temperature and humidity in the exhibition galleries, and which dates back to the early 1980s, will be replaced. Aermec, the well-known Veneto company specializing in air-conditioning systems for every kind of environment, will donate state-of-the-art plant to assure best possible results. The renovation also concerns the gallery lighting system, which will be updated with new energy-efficient technology. Meanwhile the Nasher Sculpture Garden will be transformed with a new landscape of trees, shrubs and flowers according to a project by New York architects Nelson Byrd Woltz, under the supervision of Arch. Isotta Cortese, and with the support of Mati Vivaio, Pistoia. This ‘restyling’ of Palazzo Venier dei Leoni will be directed by Venetian architect Giacomo di Thiene.

During this period, the Peggy Guggenheim Collection remains open to the public, with the exceptions of January 9, February 20 and, as usual, Tuesdays, despite the temporary closure of Palazzo Venier dei Leoni and the Nasher Sculpture Garden. From January 11 to February 19, reduced ticket charges will apply: 8 euro, and 5 euro for discounted entry.

100 masterpieces of modern art will be on view in the galleries usually dedicated to temporary exhibitions. As suggested by the title The Avant-garde. From Picasso to Pollock, the museum chronicles the avant-gardes that left an indelible mark on the history of art in the 20th century, from Picasso to Pollock, traversing cornerstones of Modernism such as Cubism, Dada, Futurism (with the works of the Gianni Mattioli Collection), the pittura metafisica of Giorgio de Chirico, European abstraction (Kandinsky and Mondrian), Surrealism (Ernst, Miró, Dalí, Magritte and others), American Abstract Expressionism, as well as artists such as Brancusi, Bacon, and Giacometti. On February 22, the collections of Peggy Guggenheim and Gianni Mattioli will return to the renovated rooms of the Palazzo Venier dei Leoni and its barchessa.

Philip Rylands, director of the Venetian museum, commented: “After more than twenty-five years, this is necessary maintenance and upgrading of the museum, and is purposefully carried out in the briefest possible time in Venice’s low tourist season. It serves precisely the museum’s dual mission: the conservation of its art collections through management of its environmental conditions, and the pleasure that the public enjoys in visiting the museum, with restored and well-lit exhibition rooms and a rejuvenated and fresh garden landscape.”

From February 29 on, the museum will be ‘back to normal’. Through May 6, the temporary exhibition galleries will host European Art 1949-1979: a selection of rarely seen postwar art from the permanent collections, chronicling Peggy’s ‘Venetian’ years, during which she continued to add to her collection. Paintings of the CoBrA group will be exhibited alongside those by Italian artists active from the late 1940s, including Peggy Guggenheim’s circle of friends (Bacci, Pizzinato, Santomaso, Tancredi and Vedova). Great exponents of British art after World War II—Bacon, Moore, Nicholson and Sutherland— are included together with their Italian counterparts, such as Mirko, Nivola, Accardi, Bonalumi, Lazzari, and Rotella. The exhibition concludes with a tribute to American artist Marion Richardson Taylor who passed away in 2010. This will be her first solo exhibition, with paintings donated by the artist to the Solomon R. Guggenheim Foundation in New York.