Rijksmuseum to receive masterpiece for its Gallery of Honour 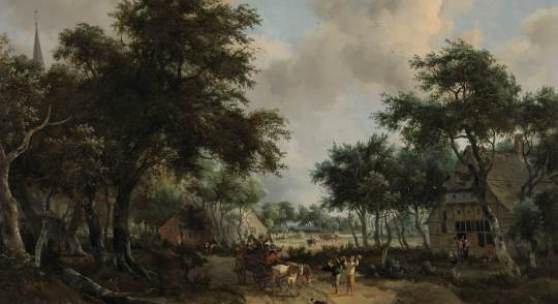 The Rijksmuseum is privileged to have acquired the biggest donation of the past fifty years: Wooded Landscape with Merrymakers in a Cart (approx. 1665) by the Dutch 17th-century painter Meindert Hobbema. This exceptionally well-preserved landscape is one of the best paintings by Meindert Hobbema, one of the most famous Golden Age landscape painters. The donation is part of Willem baron Van Dedem’s collection, who lives in England. The masterpiece is a key part of the Rijksmuseum's collection and is on display from today in the Gallery of Honour.

Wim Pijbes, General Director of the Rijksmuseum: A long tradition of important Rijksmuseum donations is honoured at the highest level. To date, there has been no other masterpiece by Hobbema in the Rijksmuseum. It's a dream come true for every director.

Wooded Landscape with Merrymakers in a Cart
A cheerful company with horse and carriage passes by several farmhouses in a wooded landscape. Figures along the sandy track are responding to their exuberant waving. Meindert Hobbema, who was at the peak of his career at this time, was student of Jacob van Ruisdael. Even though Hobbema's landscapes are very similar to those by his tutor, they are lighter and more cheerful. Tree tops reach out high in the sky and leaves are glistening in the sunlight. What's striking is that Hobbema illuminated his trees from behind, giving the display extra depth.

The donation
Donations from private individuals are invaluable for the Rijksmuseum's collection. As such, this donation continues the tradition of donations by Henri Deterding (1921), François Gérard Waller (1930) and Mr and Mrs De Bruijn-Van der Leeuw (1962). Willem baron Van Dedem has been collecting 17th-century Dutch paintings for over 50 years; his collection is regarded as one of the most important collections in the field. Van Dedem is an honorary member of the Rembrandt Association, was previously a member of the board of the Museum Boijmans Van Beuningen and is also chair of TEFAF Maastricht.