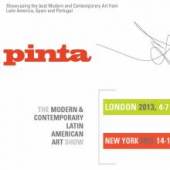 WHO IS BEHIND PINTA? One of the essential elements for the success of this project is its leadership.

Diego Costa Peuser is a cultural promoter specializing in Latin American art. In this field, he has played a leading role through different initiatives focusing on culture production which have had a significant influence on the understanding and the insertion of Latin American art in the world market.

In his capacity as CEO and Director of Arte al Día International magazine, positioned at the head of the specialized media devoted to the coverage of art produced in different parts of the world by artists of Hispanic origin, he has contributed to the focusing of the global gaze on the depth and breadth of the practices that permitted the development of artistic modernity in all Latin American countries, as well as on the way in which contemporary creation constitutes a revealing field of vision.

As director of the influential art fairs PINTA New York and PINTA London, created in 2007 and 2010, respectively, he has promoted a shift in the gaze of these metropolis, which at different moments have been the epicenters of the focus on avant-garde movements, towards art created in the center and south of the American Continent, opening up a horizontal dialogue which results in new visions. In this respect, Costa Peuser has contributed to open the threshold for a series of re-readings of art history which have transformed the recognition of essential figures of Latin American modern and contemporary creation.

In addition to his contribution through the publishing field and through the production of an event such as PINTA, to the visibility of crucial artists and to the restatement of their historical role, Costa Peuser is the founder of Buenos Aires Photo and Lima Photo, which bring each of these cities in contact with the great photographers who were the founders of the continent's modernism, through a window that establishes a dialogue between their work and the powerful artistic language of photography all over the world. In 2010, Costa Peuser was distinguished as one of the one hundred most influential Latinos in Florida. His work as a great promoter and disseminator of Latin American art has been one of the factors leading to the growing attraction of this art in the second millennium, in which the gazes of the world have transcended the confinement of borders.