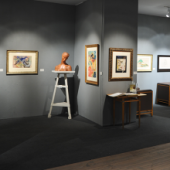 He created the first All American Antiques Show at the Pier in 1980, when both the idea of an entirely American fair and any fair held at such a remote venue were nearly unthinkable. His second show, Modernism, was seminal; at that time, no other show had presented design material from 1860–1960 as a collecting category.

The fair enjoyed a successful run for over 25 years and spawned many number of shows exhibiting material from that period, but Modernism was undisputably the first. Works on Paper followed, presenting a wide variety of watercolors, photographs, prints, drawings and pastels from Old Master to Contemporary. Again, Smith was the pioneer in the field which also generated more shows and even a magazine on the subject.