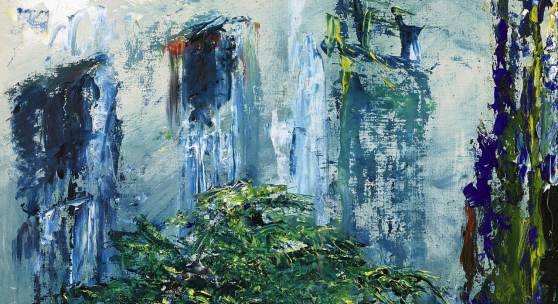 This September, Sotheby’s will offer at auction three Irish paintings recovered in County Wicklow in 2015. The works – Jack Butler Yeats’ The Fern in the Area, Paul Henry’s Landscape with Cottage, and Sir John Lavery’s Portrait de femme au chapeau – come to sale following their theft from a house in Wicklow in 2014 and the subsequent transferral of ownership of the paintings to insurance company Chubb on their recovery last year. With a combined estimated of £47,000-70,000, they will be offered in Sotheby’s Irish Art sale in London on 13 September 2016.

Charlie Minter, Sotheby’s Irish Art Specialist, said: “The remarkable recovery of these paintings has ensured that their fate looks immeasurably brighter and we look forward to finding new homes for them. The Lavery and Henry passed through our doors fifteen years ago and we’re thrilled to be able to offer them at auction again.”

Jack Butler Yeats
The Fern in the Area oil on board Painted in 1950
Estimate £20,000-30,000
The art of Jack B. Yeats, arguably the greatest Irish painter of the 20th century, is that of Ireland, and the two are irrevocably entwined. His mature style reached its fullest spate in the 1940s and 1950s, when he was at the height of his powers. The Fern in the Area was painted in 1950 when the artist, although nearing the end of his career, was also at his most prolific, producing some of his most expressive and energetic works. By this time, Yeats had discovered the possibilities of paint as an expressive medium in its own right; his handling was more loose and liquid, and his palette dramatically richer. When turning to pure landscapes without the inclusion of a figure, Yeats’ paintings were often pushed to their most abstract. Although the title hints at the subject – a fern seen by the lower edge – the other details, including the specific location, remain vague, and fused with a rhythm of colour and brushstroke. Such works show Yeats at his freest; rarely working from sketches, he preferred to paint directly and spontaneously onto the surface and to employ an adventurous use of colour, particularly with the primaries, as seen here in the blue, red and yellow.

Paul Henry
Landscape with Cottage oil on board Dated 1929-34 on stylistic grounds
Estimate £20,000-30,000
Landscape with Cottage dates to circa 1929-34 and exemplifies Henry’s atmospheric portrayal of the West of Ireland for which he is celebrated. A thatched white cottage sits nestled in the hills while voluminous cumulus clouds roll above. The compositional device of devoting the majority of the painting to the sky was a technique favoured by Henry, allowing him to evoke the sense of space and tempestuous weather that defines this rugged landscape. Landscape with Cottage demonstrates Henry’s skill in encapsulating the relationship between the Irish people and their land. The cottage points up the isolation of the rural communities, while their reliance on the land is signified by the turf stack in the foreground. During the late 1920s the artist’s output was dominated by the use of dark umbers and olive greens, colours that convey a sense of the landscape’s solidity. Distinctive of this work is the more varied palette, notably the variations of mauve and yellow, and the more heavily worked surface with strong passages of impasto.

Sir John Lavery
Portrait de femme au chapeau oil on panel
Estimate £7,000-10,000
Portrait de femme au chapeau dates from the late 1890s, a period when Lavery was travelling regularly to Germany to execute portrait commissions and exhibit at the Eduard Schulte Gallery in Berlin. During this time he would often dedicate and present small sketches to clients, and in some instances, these lively portrait studies were favoured over their more finished versions. As one of the most fashionable painters of the Edwardian and post-war beau monde, Lavery made his name and fortune with his elegant portraits. In this work –showing a sitter set against a dark background – the fluid, confident brushstrokes and subtle, understated colour modulations demonstrate an artist in masterful command of his medium.

Sotheby’s has been uniting collectors with world-class works of art since 1744. Sotheby’s became the first international auction house when it expanded from London to New York (1955), the first to conduct sales in Hong Kong (1973), India (1992) and France (2001), and the first international fine art auction house in China (2012). Today, Sotheby’s presents auctions in nine different salesrooms, including New York, London, Hong Kong and Paris, and Sotheby’s BidNow program allows visitors to view all auctions live online and place bids from anywhere in the world. Sotheby’s offers collectors the resources of Sotheby’s Financial Services, the world’s only full-service art financing company, as well as private sale opportunities in more than 70 categories, including S|2, the gallery arm of Sotheby's Contemporary Art department, and two retail businesses, Sotheby’s Diamonds and Sotheby’s Wine. Sotheby’s has a global network of 90 offices in 40 countries and is the oldest company listed on the New York Stock Exchange (BID).