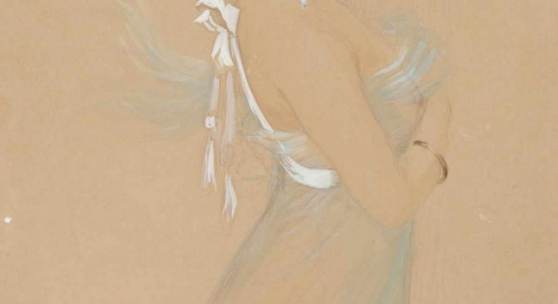 Monday 27 March auction house de Zwaan in Amsterdam will auction more than 80 lots of handwritten letters, photographs, documents and objects of Mata-Hari, the legendary Dutch exotic dancer, who was executed in France exactly 100 years ago under the suspicion of being a spy for the Germans in World War I. The collection is offered by a grandchild of Rudolph Macleod, Mata-Hari’s ex-husband.

Babybook
The collection of personal letters, photographs and poems, starts with items from the parents of Mata-Hari all the way down to MacLeod’s third wife Grietje Meijer. They offer a beautiful insight in the life which Mata-Hari started in 1876 as Margaretha Zelle: getting married at the Americain Hotel in Amsterdam, the journey to and life in the Dutch East Indies, where corsets were being ordered and the decoration of the house discussed. The babybook ("Ons Kindje") about her children, toys, postcards with Mata-Hari as a dancer on which her ex-husband wrote "executed, 15 October 1917". Grietje Meijer carefully kept all of this and passed them on to her descendants.

Brooch
Shortly before her arrest Mata-Hari trusted German military captain Justin Herre with a brooch (lot 2269). She asked him to make sure the brooch would be given to her daughter. But it wasn’t until 1923 that Herre gave the brooch to Macleod. By that time, her daughter (Louise-Jeanne, "Non", 1898–1919) had passed away. Macleod gave Mata-Hari’s brooch to his third wife for their sixth wedding anniversary.

Portrait
Also up for sale is one of the only known portraits of Mata-Hari (lot 2268), a pastel made by Henri Rudaux (1870–1927). The French painter and poster designer was rumored to be her lover. A copy of the print was used in the court case against her. She was showed the picture and asked to identify herself. Copies of the Scotland Yard transcript are being sold with the portrait.

Donation Friesland
De Zwaan acted as an intermediary for the descendants who donated part of the collection to Tresoar, the Frysk Histoarysk en Letterkundich Sintrum in Leeuwarden. Next to the documents also hair of their deceased children (their son died in 1899 at the age of 3), grave ribbons and dried funeral flowers are donated.