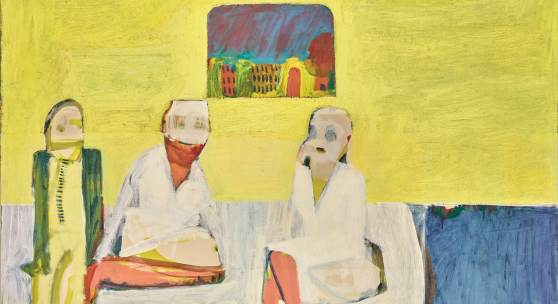 FRIENDSHIPS
Friendship was important to Hodgkin. As his recent exhibition at the National Portrait Gallery exhibition so eloquently demonstrated, his relationships with people - fellow artists, writers, collectors, academics, family and friends - have been at the centre of his life but also inform his best work. The two early paintings in the sale are critical to understanding both subject and style. Painted in 1960–61, Bedroom recalls a moment in a hotel room in Paris together with his wife Julia, and their friend Mrs Burt. Travelling, painted at the same time, reflects a lifelong interest in experiencing other places. His friendships are powerfully represented in his personal collection by the works of fellow artists with whom he was particularly close and, crucially, those whose art he respected and admired. He once described Patrick Caulfield as “the closest I ever came to having a painter-colleague”, and it is significant that one of Caulfield’s most important still life paintings should end up in his collection. Painted in 1966, Sweet Bowl reveals Caulfield’s heightened awareness of both colour and space, an interest that he clearly shared with Hodgkin. The dynamic minimalist style Caulfield developed where the hand of the artist is almost invisible is, however, almost the extreme opposite of Hodgkin’s own energetic application of paint and it is interesting to consider their work side by side. Further friendships represented by works that Howard owned include Robyn Denny, Peter Blake and Stephen Buckley.

“Painting in a studio is naturally a lonely occupation... Collecting, on the other hand, brings with it an almost automatic series of introductions, social contacts, with dealers, scholars and occasionally with fellow collectors.” howard hodgkin

The presence of two works by Bhupen Khakhar in the collection is also the result of a long and storied friendship between the two artists. De-Luxe Tailors, 1972 (est. £250,000–350,000) which featured prominently in the recent Tate retrospective of Khakhar’s work, epitomises the artist’s early style and is a signature work from this period. Hodgkin was in many ways his mentor and in some ways his liberator. Hosting Khakhar in England at various times in the late 1970s, finding him teaching positions and advocating for his works with galleries and museums, Hodgkin helped Khakhar to expand his horizons: his art seemed to become freer, looser, funnier and unflinchingly honest. It was Howard Hodgkin’s friendship and encouragement that may have sparked Khakhar’s recognition as one of India’s greatest 20th century artists.