Modern Renaissance: Full Line Up Unveiled for Auction on 25 March 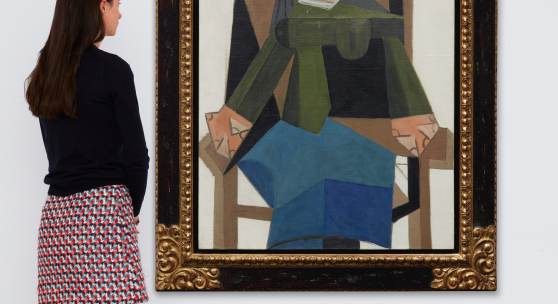 Psychological Portraiture by Pablo Picasso Picasso’s powerful seated portraits of Surrealist photographer Dora Maar, who was his lover during the war, forever altered the way that portraiture was perceived. In this strikingly original painting from November 1941, bold geometric lines fragment the ambitious composition. This radical distortion of Maar’s features encapsulates Picasso’s innovative approach to capturing the likeness and personality of his sitter.

The chair envelops Maar like a throne and her hat becomes a crown, intensifying the magnitude of her presence. With her hands, sharp like talons yet extended to the viewer, Marr becomes a condemnatory voice speaking out against the violence of war whilst also calling for resilience and optimism in the face of despair.

Two Paintings by Edvard Munch from the Olsen Collection A rare self-portrait and a large-scale frieze originally owned by Munch’s friend, neighbour, chief patron and owner of The Scream, speak to the artist’s contemporary obsession with the angst of the human condition.  When the Nazis rose to power were deaccessioned from the works the list of so-called ‘degenerate’ artists, these and placed Munch on    Städtische Kunsthalle and Nationalgalerie in Berlin. Embrace on the Beach then briefly hung in Hermann Goering’s private study, who secretly remained a fan of Munch’s art. Desperate to save his pictures, Munch consulted his friends to arrange an auction and help re-patriate the works back to Norway. Embrace on the Beach was a commission from one of Munch’s patrons to decorate a nursery, but was deemed unsuitable for a child’s room and returned to the artist. Munch then added the embracing figures in the left, transforming the bucolic landscape into a scene full of drama and tension. It was last sold at Sotheby’s in 2006, when it made a record for the artist, which was surpassed a few years later by The Scream. The self-portrait, dating to 1926, is making its auction debut and is the first formal self-portrait by the artist to come to the market in 15 years.

David Hockney Triptych inspired by his favourite Old Master
This four-metre wide landscape by David Hockney was inspired by the artist’s favourite Old Master in the National Gallery – Meindert Hobbema’s The Avenue at Middelharnis, a seventeenth-century painting that also inspired Van Gogh. Hockney first saw the painting as a teenager and it remained with him until he reinterpreted it at the age of 80. Hobbema had a ground-breaking approach to perspective, just like Hockney, who here reverses what is expected of the landscape genre.

Having graced the cover of The New Yorker magazine in 2017, this is the first work to come to auction from a series of late landscape paintings on hexagonal canvases.

Four Post-War rediscoveries by Dubuffet, Fautrier and Wols
The auction will also unveil four hitherto unseen rediscoveries by Jean Fautrier, Jean Dubuffet and Wols, bought by the same private collector soon after they were painted. Having been executed between 1944 and 1947, the works provide a window onto the art being produced in a Paris slowly re-emerging after the horrors of the Second World War.

When they were acquired, all of these artists were practically unknown. Dubuffet had only just held his first solo exhibition the year before and the Wols comes from the artist’s first ever series. Galerie René Drouin was the first to exhibit both of these artists, whose works would have been considered extremely radical, and Drouin himself even loaned Dubuffet his basement at Place Vendôme to paint in.

Pioneers of Abstraction: Gorky and Kandinsky
Two rare works by Arshile Gorky and Wassily Kandinsky – unseen since the early 1970s – epitomise the journey from Europe to America of abstraction in the mid-twentieth century. This began with Cubism and its early advocates such as Kandinsky, whose works Gorky would visit the Guggenheim to see, and found its ultimate expression in Abstract Expressionism, a movement that both of these artists had a profound impact on. Quadrat (Square) was made by Kandinsky at the heart of the Bauhaus years, when the artist was systematically developing an almost scientific theory of abstraction, reflected in the purely geometric title of this work.

Gorky created just a small handful of paintings around the idea of the Garden in Sochi, with two now in the collection of MoMA in New York. They were inspired by childhood memories of his father’s garden in his native Armenia. This version is considered the finest exposition of the theme.

Rare Renaissance Portrait by Piero del Pollaiuolo
The auction will offer the only known portrait by 15th century painter Piero del Pollaiuolo left in private hands. Depicting a smooth-faced and fine-featured young sitter set against a sky of graduated blue, Portrait of a Youth (estimate £4-6 million) comes to the market hot on the heels of the record-breaking sale of Sandro Botticelli’s Portrait of a Young Man Holding a Roundel for $92 million. The two remarkable Renaissance masterpieces once hung side by side in the same collection – that of Thomas Ralph Merton – the first scientist to be employed by the British secret service, and the original ‘Q’ of MI6.