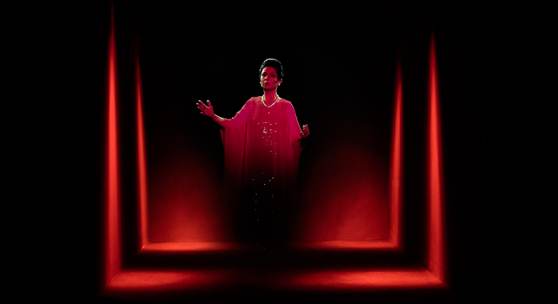 This fall, the Museo Nacional Thyssen-Bornemisza and Thyssen-Bornemisza Art Contemporary (TBA21) present an exhibition with works by Dominique Gonzalez-Foerster and Tomás Saraceno which invite visitors to explore questions surrounding technologies, artificial intelligence, the collective minds of animals, and the power and attraction of the unknown. This is the third collaboration between the two institutions, on this occasion curated by Stefanie Hessler.

In Opera (QM.15), Dominique Gonzalez-Foerster appears as the soprano Maria Callas while singing some of her most famous arias. Opera (QM.15) forms part of a series of works that refer to actresses such as Marilyn Monroe and Sarah Bernhardt which the artist terms “apparitions”. The work draws on the history of photography and the supernatural, as if it were, in the words of Gonzalez-Foerster, “a kind of spiritual session”.

Tomás Saraceno presents the installation How to entangle the universe in a spider web?, among a selection of other recent works. The piece forms part of his celebrated studies of spider/webs, whose complex structures resemble tiny universes, surpassing many of the architectural and other constructions made by humans, resonating across scales with the cosmic web. Saraceno often amplifies the vibrations of spider/webs as if they were musical instruments, making them audible for human participants. These entangled floating landscapes create a sensorial and living connections across ecosystems, resonating among participants to create a fuller awaren