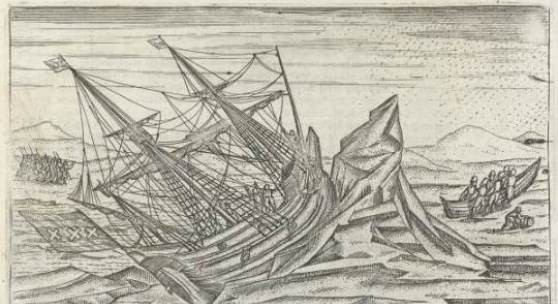 Starting on 22 November, the Rijksmuseum will be exhibiting roughly 75 original objects from Nova Zembla. The objects were left on the island in 1597, after Willem Barentsz had overwintered there with his crew, and were found three centuries later. Weapons, goods, tools and personal belongings will be on display. The exhibition will also include new work by British artist Siân Bowen, who took inspiration from prints that were also found on Nova Zembla.

The objects lay frozen in the polar climate for almost three centuries (from 1597 to 1872) and therefore remained remarkably well preserved. Among the things found were a halberd used to fight hungry polar bears, the tools with which the crew built the famous Behouden Huys [the lodge in which they spent the winter], a fine-toothed comb and a clock: this exhibition brings the visitor up close and personal with one of the most oppressive voyages of discovery ever made. As Jan de Hond, Curator in the Rijksmuseum’s History Department, explains: ‘We are telling the dramatic story of a very exciting period in our history, which comes to life through the movie Nova Zembla. In the presentation we will use QR technology to add meaning to the historical objects.’ The Rijksmuseum, the premier museum of the Netherlands, has a total of approximately 200 objects from Nova Zembla in its possession.

Sián Bowen, guest artist in drawing at the Rijksmuseum
British artist Siân Bowen (1959) conducted an intensive study of the reconstructed prints at the Rijksmuseum and was particularly fascinated by how beautifully the passage of time could be read from their appearance: ‘The extraordinary history of the prints and the ways they have changed over four centuries inspires me to think about making drawings in new ways’. Using old techniques, such as watermarks, blind stamping, drawing and gilding, she has incorporated five themes from the Barentsz expedition into 25 works.


Print from the travel report by Gerrit de Veer. At the end of August 1596, the ship got stuck in the drifting ice in a bay off the northeast coast of Nova Zembla. As a precaution, the crew began to bring provisions from the ship to the island.
Rijksmuseum Amsterdam