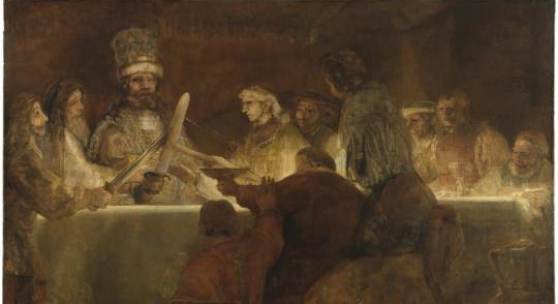 For the first time the Rijksmuseum will present a major show to Rembrandt’s late work, in Amsterdam, the city where it was created.

The city of Amsterdam celebrates its most famous artist
With 40 paintings, 20 drawings and 30 prints, Late Rembrandt presents a comprehensive overview of the artist's work between approximately 1652 and his death in 1669. In collaboration with the National Gallery of London, the artworks in the exhibition are on loan from leading international museums and private collections, many of which have been brought together for the first time.

To coincide with Late Rembrandt, a series of events, including a walking tour and a boat trip will be organised across Amsterdam to the landmarks where Rembrandt lived and worked including the Rembrandt House Museum (Rembrandthuis) and West Church (Westerkerk) where he was buried.

“This exhibition of a lifetime will reveal to a new generation the mastery of Rembrandt, who is the greatest figure in Dutch art of the Golden Age and perhaps the most famous of all Dutchmen.” Wim Pijbes, General Director Rijksmuseum

Against the backdrop of tragic personal losses and ongoing financial difficulties, Rembrandt began experimenting with printing and painting techniques in the later years of his life, producing some of the most distinctive, innovative and daring works of his career. His global reputation was eventually shaped by the late masterworks such as Self-Portrait with Two Circles (Kenwood House, London), the Family Portrait (Herzog Anton Ulrich-museum, Braunschweig), Jacob Blessing the Sons of Joseph (Gemäldegalerie Alte Meister, Kassel) and The Jewish Bride (Rijksmuseum).

One of the most spectacular examples of Rembrandt's experimentation from this period is Lucretia (Minneapolis Institute of Art), in which the artist made use of the unusual technique of applying two overlapping layers of paint on the right sleeve, showing extensive use of a palette knife. It will be displayed alongside The Three Crosses, a highlight of Rembrandt's late printmaking which achieves a dynamic contrast between light and dark not seen before with this technique.

One of Rembrandt’s most famous drawings, Young Woman Sleeping (British Museum), is typical of Rembrandt’s later work: an intense scrutiny of an intimate moment. Rembrandt adopts a similar approach to depict history in his large paintings, as can be seen in the epic canvas Jacob Blessing the Sons of Joseph (Gemäldegalerie Alte Meister, Kassel).

Late Rembrandt was created in collaboration with the National Gallery London, where the exhibition will be shown from 15 October 2014 to 18 January 2015. The paintings The Family Portrait (Herzog Anton Ulrich-museum, Braunschweig), the Self-Portrait as Zeuxis Laughing (Wallraf-Richartz Museum-Fondation Corboud, Cologne), Portrait of Jan Six (Six Collection, Amsterdam) and Jacob Wrestling with the Angel (Gemäldegalerie, Staatliche Museen zu Berlin) can only be seen in Amsterdam.


Rembrandt, The Conspiracy of the Batavians under Claudius Civilis, about 1661. Pen and brown ink, with brown wash and white bodycolour. 19.6 x 18 cm © The Royal Academy of Fine Arts, Stockholm
Rijksmuseum Amsterdam