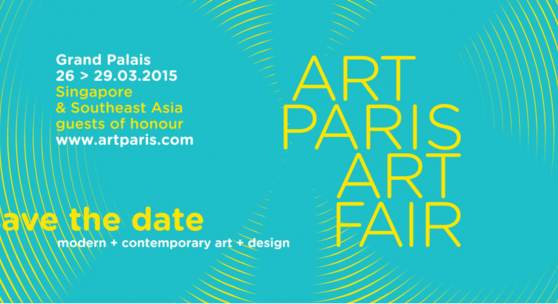 From 26th to 29th March 2015, Art Paris Art Fair brings together 140 galleries from some 20 countries at the Grand Palais. Headed by Guillaume Piens since 2012, the fair focusses on discovery and presents a wide panorama of modern and contemporary art. Art Paris Art Fair also shows design, photography and art books. The fair has undergone a profound renewal with 51% of both newcomers and galleries from abroad. Since 2012, a rigorous selection process and a multi-disciplinary, dynamic approach to contemporary creation have resulted in a constant rise in the number of visitors to the fair.

With a strong international focus, the fair has positioned itself as a pioneer in the exploration of regions of the world whose artistic creation is seldom, if ever, shown in France. Art Paris Art Fair looks at a different geography of the art world that takes visitors off the beaten track to places like Casablanca, Bangkok, Zürich, Moscow, Bucharest or Singapore After Russia and China, Singapore and Southeast Asia are guests of honour for the 2015 edition. This platform is directed by Iola Lenzi, a curator, researcher and Southeast Asia specialist who curated the exhibition “The Roving Eye: Contemporary Art from Southeast Asia” shown at the ARTER Foundation in Istanbul (September 2014 to January 2015). A dozen Singapore-based galleries including Art plural Gallery, Art Seasons Gallery, Chan Hampe Galleries, Element Art Space, Yeo Workshop, iPreciation or Sundaram Tagore Gallery will demonstrate the diversity of talent from Cambodia, Burma, Malaysia, Indonesia, the Philippines, Vietnam and Thailand. A programme of talks and video screenings will complement this presentation of what is a little known but booming art scene.
The general sector will also include a number of galleries and artists from Southeast Asia including Thai artist Navin Rawanchaikul at Adler Subhashok, Burma’s Aung Ko at Primo Marella, Vietnam’s Dinh Q. Le and Bui Cong Khanh at 10 Chancery Lane, and from the Philippines, Manuel Ocampo at Nathalie Obadia and Alfredo & Isabel Aquilizan at Hélène Bailly.

The Promises section successfully introduced in 2013 as a way of promoting the discovery of new international talents, this year includes 12 galleries that are under five years old and are taking part in the fair for the first time. This is Art Paris Art Fair’s specific effort to help young French and international galleries become better known and reveal new talents. They include Archiraar (Brussels), Podbielski (Berlin), Christophe Gerber (Lausanne), Heinzer Reslzer (Lausanne), Jo Van Loo (Münich), TJ Boulting (London) and Rivière / Faiveley (Paris).
The ArtDesign section explores the relationship between design and contemporary art. Now in its fourth year, it brings together a dozen galleries presenting unique or very limited edition pieces produced by contemporary talents. Journalist and founder of Sleek design magazine Elodie Palasse Leroux is overseeing the 2015 selection that includes NeC nilsson et chiglien, School Gallery and l’Eclaireur. In addition, Carpenters Workshop gallery in the general sector is taking part in the fair for the first time.

The “Springtime in Paris” VIP programme highlights the outstanding revival of the Parisian art scene, the new venues such as the Appartement, the Louis Vuitton Foundation with its inaugural exhibition The Keys of a Passion, the Jérôme Seydoux-Pathé Foundation and the Philharmonie de Paris. Also on show is the exhibition Pierre Bonnard (1867-1947), Peindre l’Arcadie at Musée d’Orsay, Taryn Simon at the Jeu de Paume, Pieter Hugo at the Henri Cartier-Bresson Foundation, Carmen Perrin at the Maison de l’Amérique Latine, Mathieu Briand / Jérôme Zonder at la Maison Rouge, Mark Lewis at Le Bal... In March 2015 the art scenes of Singapore and Southeast Asia will have pride of place in the French capital with an exceptional series of events in key locations: at the Palais de Tokyo, the exhibition Secret Archipelago (from 27th March to 17th May 2015) explores the regional art scene with Singapore as a springboard. As part of its Satellite programme, The Jeu de Paume will be screening the work Monologue by Cambodia’s Vandy Rattana.