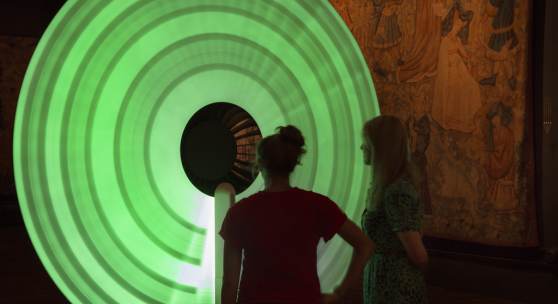 Also within the West Wing, the genteel traditions of the English drawing room have been redrafted by designer Faye Toogood. Visitors will experience an environment that evokes a derelict country house – although in this case the surrounds have been literally drawn in, as charcoal sketches on the translucent plastic sheets that line the walls. The furniture is an intriguing combination of antiques, abstracted cardboard sculptures and reassuringly chunky contemporary pieces drawn from Toogood’s recent ‘Roly-Poly’ collection, remodelled for the occasion in charcoal- hued fibreglass.

SERIF The River Rooms Supported by Samsung
The London Design Festival hosts the worldwide release of a new product designed by French brothers Ronan and Erwan Bouroullec and produced by electronics giant Samsung. Called Serif, the new design doesn’t belong so much to the world of technology but to the world of living.

#POWEREDBYTWEETS Terrace Rooms
Supported by Twitter UK Visitors to Somerset House will also be able to see the winning entries from a nationwide design competition called #PoweredByTweets organised by the London Design Festival with Twitter. #PoweredByTweets:The Challenge, which launched in April, invited entrants to come up with an idea that either solved a problem using Twitter or created something beautiful using Twitter data. Already around the world, the live and public nature of Twitter has inspired people to create objects and installations that are powered by Tweets. A Tweet can make something move, light up or even fly and it happens in real time. This competition helped galvanise some of these ideas and attracted entries from across the country from creative agencies, media agencies and brands to universities, hospitals, start- ups and, of course, individuals. There were six winners in total, with three in each category, each of the winning entries will be built by Pixie Labs (@pixielabs) and shown at Somerset House during the Festival in an exhibition designed by Bureau de Change. Winners receive a Twitter Ads budget to help develop and spread their ideas even further. Winning entries included using a pigeon air patrol to monitor the quality of air and report back in real time on Twitter and creating a beautiful interactive art piece that uses Twitter to campaign against the law that bans gay men from becoming blood donors.

MY GRANDFATHER’S TREE BY MAX LAMB
The Embankment Galleries - Mezzanine & Studio Supported by Gallery FUMI When designer Max Lamb was chopping down an ash tree that had been struck by lightning on land belonging to his grandfather, an idea began to evolve on how he might create a new life for the tree. With a friend, John Turnbull, he began to cut the tree into sections at regular intervals, respecting natural divisions within the structure such as knots and branches, transforming the segments into simply crafted pieces of furniture such as stools, tables and chairs. In collaboration with Gallery FUMI, Lamb has now divided the tree into 130 logs which will be laid out in Somerset House to form a 27m long tree, the ash tree continuing to exist as an ash tree but with a new life, a new function and the start of a new history.

BRITISH LAND CELEBRATION OF DESIGN EXHIBITION
Every year a selection committee comprising established designers, commentators and previous winners sit down to choose recipients of The British Land Celebration of Design Awards. The winners are picked from a wide range of design disciplines and awarded for their exceptional contribution to their field. For 2015, the illustrious selection board includes Dr. Martin Roth (Director, V&A), Paul Thompson (Rector, Royal College of Art) and Justine Simons (Head of Culture, Mayor of London). This year for the first time an exhibition will present key works from the winners of the British Land Celebration of Design Awards 2015. Once again, there will be four categories including headline support from Panerai who are supporting the Panerai London Design Medal, as well as the PCH Design Innovation Medal and the Swarovski Emerging Talent Medal. The exhibition will show imagery and objects chosen by the four winners to represent their achievements and will remain on show for the duration of the Festival.