The Biggest Art Expo is Back and Celebrating 40 Years! 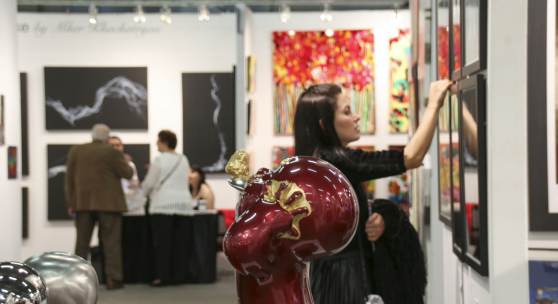 New York, NY  April 13th, 2018: Artexpo New York celebrates its 40-Year Anniversary as the worlds largest fine art marketplace, returning to Pier 94, located at 711 12th Avenue in Manhattan, from Thursday, April 19th to Sunday, April 22nd. This years caliber of world-class exhibitors is comprised of artist talent that rivals that of any fine art show or contemporary exhibition in the world today.

To celebrate 40 years of excellence in art, Artexpo New York presents [MAGNIFY] as the curatorial theme for 2018  examining four decades of artistic expression through a retrospective lens. During its 40-year history, Artexpo New York has hosted the likes of Andy Warhol, Robert Rauschenberg, Keith Haring and Leroy Neiman; magnifying the very best the fine art world has to offer. In addition to coming to see the worlds largest fine art trade show, more than 35,000 avid art enthusiasts and 5,000+ trade and industry leaders will return to enjoy [SOLO] highlighting established and independent emerging artists and [FOTO SOLO] featuring fine art photography from some of the worlds finest abstract, contemporary and realist photographers.

Here are five of the most popular and must see artists exhibiting during Artexpo New York XL.

Rabarama - Contemply Gallery  Booth 241
Paola Epifani, alias Rabarama, was born in Rome in 1969. She lives and works in Padova, Italy. The daughter of an artist, from her early childhood she showed an inborn talent for sculpture. She started her artistic education at the Arts High School in Treviso, and continued later at the Venice Academy of Fine Arts. She graduated with top marks in 1991 and immediately started taking part in a large number of national and international sculpture competitions, earning growing acclaim with both the critics and the general public alike. Rabarama's sculptures and paintings depict with men, women or hybrid creatures, often eccentric. The skin of the subject created by the artist is always decorated with symbols, letters, hieroglyphics and other figures in a variety of forms. The membrane or cloak that seems to envelop these figures is constantly changing, always adding new signs, symbols and metaphors.

Alexis Silk - Mattson's Fine Art  Booth 263
The work of Alexis Silk has been called timeless. Working in cast bronze, hot sculpted blown glass and steel, she explores interrelationships of humanity, culture and industry. Thought provoking works emerge from the intersection of her fascination with the human figure, passion for her molten medium, and desire for conceptual expression. Silk is constantly pushing the boundaries of what is possible, sculpting her glass figures entirely freehand while the glass is hot on the end of a blowpipe or punty rod. Her largest figures are close to half her body weight and take a team of six assistants to handle the glass while she is sculpting it. While making intrinsically beautiful objects, her figures are an eloquent exploration of objectification of the body and current cultural issues.

Anna Razumovskaya - Anna Art Publishing  Booth 207
With her classic figurative forms, highly acclaimed Russian artist Anna Razumovskaya magically captures the lyrical romanticism of renaissance portraiture, while creating art that is completely modern and original. Anna is inspired by the graceful elegance of the female form, at turns, classically alluring, demure and provocative. Anna's eclectic mix of experiences has enabled her to create a truly unique signature style that resonates with those who share her passion for life. She is a great believer in art's power to heal, transform and inspire others in their journey.

Samir Sammoun - Sammoun Fine Art  Booth 233
At his very first Artexpo New York in 1996, Samir Sammoun's originality and unique style caught the attention of viewers, gallerists, collectors and art lovers. With After that initial discovery, the response to his fresh colorful impressionistic style has continued to build over the 20+ years he has showcased his work at Artexpo. Depicting rich landscapes in his wonderfully unique impressionistic style, his paintings reflect a tranquil, happy mood. Clearly the artwork of a man who loves life, he says: I try to make the person looking at my painting feel the color of the sky, the temperature of the air, and the breeze in the apple trees or the wheat stalks. Sammouns subtle touch and rhythmic gesture with his brush, combined with his personal grace and spontaneity, seems to infuse each painting with his personal inspiration.

Tim Tadder  Arte Collective  Booth 345
Tim Tadder is an advertising photographer in southern California, specializing in creating dramatic photographs of people, sports, action and concepts. Tadder uses location photography combined with lighting effects to create truly unique images. Tim Tadder is an internationally acclaimed photographic artist. In 2015 Epson, the world leader in photographic printing technology recognized Tadder as one of the top influential photographers, producing a TV commercial and worldwide ad campaign featuring Tadder and his work. In 2012 Tadder created a viral collection of images that was ranked by Time magazine as one of the top internet sensations of that year. Tadders work hangs on the walls of world leaders in politics, business, art and sport, having been commissioned to make personal portraits for notables like President George W. Bush, Bill Gates, and Manny Pacquiao. His latest collection entitled Nothing To See features Americas Next Top Model 2018 season finalist Jeanna Turner, an Alopecia sufferer, standing tall in this remarkable photographic depiction of motivation.