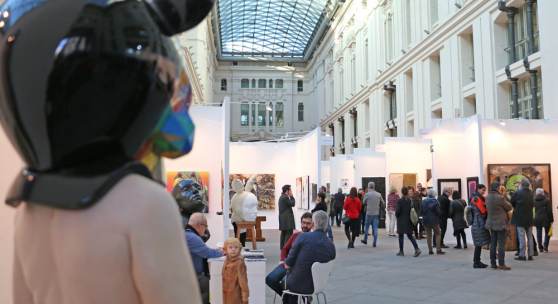 Madrid, June 28, 2018. Art Madrid’19 is celebrating the incorporation of the young curator and independent art critic Nerea Ubieto (Zaragoza, 1984) to the team of the fair. Ubieto, as well as being part of the Selection Committee of the fair, will be responsible for curating the ONE PROJECT program at the fourteenth edition of Art Madrid (from February 27 to March 3, 2019), and she replaces Carlos Delgado Mayordomo, curator of the last five editions, a time in which this program has established itself as a true “showcase for new talent”.

DO YOU KNOW WHY ONE PROJECT IS SOMETHING SPECIAL?
The ONE PROJECT program complements the General Program of the Art Madrid fair and it is characterised by grouping several artistic projects in a “solo-show” format dedicated to new, multidisciplinary and specific proposals for the space and context of the fair. It is an exhibition program coordinated by an independent curator that selects artists and proposals (from national and international galleries) under a unitary discourse around an idea, concept or specific theme.

With Nerea Ubieto, who has among her latest exhibitions “Return Flight Tickets” at the Max Estrella Gallery (Madrid); “The invisible threat” in Sala Amadis (Madrid); “The place where I live” in Galería Ponce Robles (Madrid) or “Keep calm and carry on”, inaugurated in Tabacalera Madrid and itinerant by the AECID Cultural Centers Network in Latin America; the ONE PROJECT will become a catalyst for some of her favourite topics such as those with a philosophical approach, personal identity, issues around feminism, queer, the expanded corporalities or the sensory experience.

ONE PROJECT is the perfect space for the galleries to give a boost to the career of a new artist and to develope more innovative and experimental formats and proposals for that specific exhibition space. The curator, as Nerea points out in this interview for Art Madrid, “provides a new perspective regarding the relationships that may occur between the proposed works. This vision promotes - but not always in a simple way - that the spectator can establish their own interconnections. The curatorship contextualizes, broadens readings and, why not, generates an attractive discourse that can serve as a hook for an audience that otherwise would not have approached certain discourses. In my opinion, the curated perspective should bring the viewer closer. I try not to lose sight of this and imagine what my parents would think when they entered the exhibition. “  

The ONE PROJECT program, with young and mid-career artists with a prominent presence in the Spanish exhibition area, has been growing in quality and has become a great attraction for collectors and art profes- sionals, as well as for specialised critics, since it is a commitment to a more personal and reflective art, which questions and delves into the very conception of the plastic image and its limits.

ONE PROJECT: FOR THE EMERGING CREATION AND NEW COLLECTING
The ONE PROJECT program was born in 2012 as a novelty within the Young Art program of the fair. Curated and coordinated in its first two editions by the art critic Javier Rubio Nomblot, it had from its origins very de- fined objectives: to promote the plastic creation and the new collecting.

2014 was a year of transition at many levels and Art Madrid launches new team, philosophy and venue. ONE PROJECT is also renewed adding new energy to the previous experience with a “two headed” curating bet- ween Rubio Nomblot and Carlos Delgado Mayordomo, independent curator who has taken over the project since then. Five editions in which the program has grown in prestige and international participation, being “a dialogue, a pause, a reflection” and a showcase of talent within the fair.

In these years, Carlos has reflected on the environment, the elastic, dynamic and multifaceted dimension of the contemporary city, the questioning of the relationship between art and reality, the artificiality of con- temporary creation or the identity of the creator. The ARTISTS LIST that he has selected for this program is impeccable and includes national and international names, emerging artists and mid career of all disciplines.