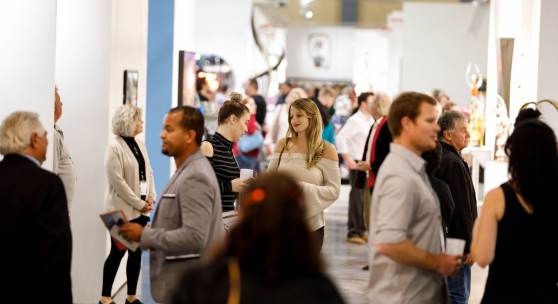 Lee Ann Lester and Core Hampson Co-Directors of the fair remarks ”this 23rd edition launches a launches new fair pavilions for curatorial projects and immersive installations which draw on today’s most pressing global issues and establishing a the fair’s commitment to our mission of opening dialogues between today’s creatives and global politics, sustainability, and equality as well as embracing the contributions of local nonprofits to the Palm Beach's rich cultural landscape.” Over 70 seventy international galleries will participate in the four and one-half day show coinciding with South Florida’s SuperBowl celebration.

For the first time in the fair’s history an entire section of the main exhibition hall will be committed to expanding curatorial programming under the direction of the fairs Artistic Art Director, Pietro Daprano encompassing; APB_Installations, APB_FOCUS: APB_Photography, APB_Next Level, APB_Editorial, APB_Flow Video, APB_Art & Fashion, and APB_Community.

Inaugurating this new APB_Installations is the “Museum of the Moon” by Luke Jerram, an 8000 square foot multimedia artwork that has been on a worldwide museum tour stimulating our sense of conservation for our one and only place to live: the earth. Over a year in the creation, Jerram creates a moon landing. Jerram used NASA's high-resolution imagery to make his giant moon. The moon sculpture is exactly half a million times smaller than the real thing, made with data from NASA's Lunar Reconnaissance Orbiter. Researching the actual communications between the astronauts and worldwide tracking stations Jerram created a soundtrack and Luna Moonlighting.

“Throughout history, the moon has inspired artists, poets, scientists, writers, and musicians the world over,” “The ethereal blue light cast by a full moon, the delicate crescent following the setting sun, or the mysterious dark side of the moon has evoked passion and exploration. Different cultures around the world have their own historical, cultural, scientific and religious relationships to the moon.” quotes British artist Luke Jerram.

The arrival of “Museum of the Moon” comes to APB directly from a London museum where the artwork broke attendance records. Jerram’s artwork drew over 2 million in China, 640,000 in Belgium and over 1.4 million attendees in London. A spherical sculpture with internal illumination in the shape of the 23-foot moon designed from high-resolution NASA images. celebrate the 50th anniversary of the Apollo 11 moon landing.

The exhibition was sponsored by the Imagine Museum, St. Petersburg, FL.

Also highlighted in this exhibition are important works by many female photographers whose compositions comprise female subjects as the leading role. Since the mid-twentieth century female artists have been underrecognized in both museums, galleries. Only 11 % of the museum’s collections are by women and only 30% of art galleries exhibit female artists. This exhibition claims the leading role of women in society, in art, and photography.

APB_Power Talks a full lecture series, artist booth talks, and guided curatorial tours are available to all attendees. For a full schedule: www.nextlevelfairs.com/artpalmbeach