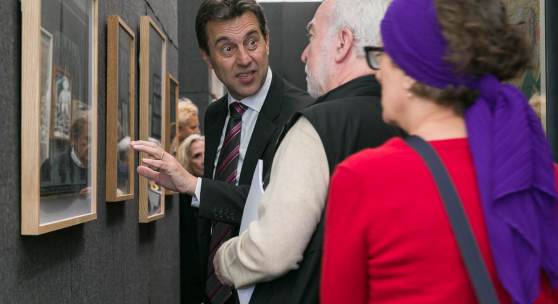 Matthew Slotover is a founder of Frieze. Matthew is currently chair of the South London Gallery board of trustees. In 2000 he was a judge on the Turner P rize. And in 1993 he curated a section of the Aperto at the Venice Biennale, which included Damien Hirst, Mat Collishaw and Rirkrit Tiravanija. He has spoken at several international conferences and symposia in venues such as the Moderna Museet, Stockholm, Neue Museum, Graz, the Museum of Modern Art, New York and Tate Modern, London.

In 1999 Matthew co - founded Counter Editions, with curators Carl Freedman and Neville Wakefield. Victoria Siddall oversees all Frieze Fairs. She has worked for Frieze since 20 04 and launched Frieze Masters in 2012. In November 2014 Siddall was appointed Director of Frieze London (from 2015) and Director of Frieze New York (from 2016), in addition to her existing position as Director of Frieze Masters. Siddall is also Chair of S tudio Voltaire’s board of trustees. Bettina Korek : Executive Director of Frieze Los Angeles. Korek is also founder of ForYourArt, a Los Angeles - based organization that produces projects with artists, promotes information about exhibitions and events, and works with diverse stakeholders to encourage patronage, engagement and collaboration. ForYourArt produced the Participating Gallery program for both of the Getty’s Pacific Standard Time 2012 and 2017 initiatives. ForYourArt’s role as liaison connecting di fferent corners of the art world inspired artist John Baldessari to describe the organization as “special and unique because it is a neutral space.” ForYourArt has published a trusted free art guide to Los Angeles for over 10 years. ForYourArt is developin g a report on the state of arts patronage.

Korek is a member of the of the Los Angeles County Arts Commission. Ali Subotnick is an independent curator. She was Curator at the Hammer Museum in Los Angeles for over ten years, where she organized the exhibi tions “UH - OH: Frances Stark 1991 – 2015,” “The Afghan Carpet Project” (both 2015), “Mark Leckey: On Pleasure Bent,” “LLYN FOULKES” (both 2013), and “Nine Lives: Visionary Artists from L.A.” (2009), among others. For one weekend in July 2012, she organized the first and only Venice Beach Biennial, a weekend exhibition/event on the Venice Beach Boardwalk, which was a collateral event to “Made in L.A. 2012” (which she co - curated). She also organized over 20 Hammer Projects solo exhibitions, many debut American institutional exhibitions for the artist. In 2006, along with her frequent collaborators, artist Maurizio Cattelan and curator Massimiliano Gioni (together they created the alternative, small scale, non - profit space, The Wrong Gallery and Charley magazine ), she co - curated “Of Mice and Men”, the fourth Berlin Biennial for contemporary art.

Hamza Walker is the Director of LAXART, an independent nonprofit art space in Los Angeles. From 1994 – 2016, he was the Director of Educa - tion and Associate Curator at th e Renaissance Society at the University of Chicago, a non - collecting museum devoted to contemporary art. In 2017 he co - curated (with Catherine Taft) “Reconstitution”, a group exhi - bition mounted at LAXART. In 2016 he co - curated (with Aram Moshayedi) “Made in L.A.” at the Hammer Museum, and in 2015 he curated “A Painting is a Painting isn’t a Painting” at the Kadist Foundation in San Francisco