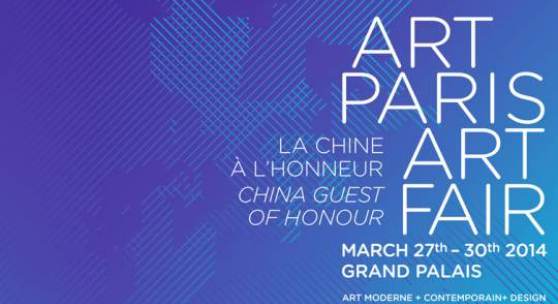 From 27th to 30th March 2014, some 140 international galleries from 20 countries will come together at the Grand Palais in Paris to present a wide-ranging panorama of modern and contemporary art, including photography, design and art publications.

The selection of galleries for 2014 goes one step further towards confirming the event’s new identity and direction adopted three years ago: a European fair that explores Eastern lands (Central Europe, Middle East and Asia.) Alongside the galleries that came as part of last year’s invitation to Russia as guest of honour, a number of galleries are coming in response to the invitation of China this year. Several Asian galleries are also joining such as Hua Gallery (London), Adler Subhashok Gallery (Bangkok) and 313 Art Project (Seoul). Although Art Paris Art Fair is becoming increasingly international (50% of foreign galleries

Although Art Paris Art Fair is becoming increasingly international (50% of foreign galleries this year compared to 43% in 2013), the fair remains committed to supporting those who constitute its foundations in Europe and France where it is deeply anchored. Among the new participants are Feizi (Brussels), Ditesheim & Maffei Fine Art (Neuchâtel), Alessandro Bagnai (Florence) as well as Mario Mauroner (Vienna) who returns to the fair this year. Among the French, Camera Obscura, Bertrand Grimont are returning while others are coming for the first time, including Françoise Besson (Lyon), In Camera (Paris), Françoise Livinec (Paris), and in the design section, Jousse Entreprise (Paris), Armel Soyer (Paris) and Galerie NeC nilsson et chiglien (Paris).

With some 90 Chinese modern and contemporary artists represented, ART PARIS ART FAIR turns the spotlight on what is a rich and dynamic art scene. Different generations of artists will be shown by ten galleries that are coming from Beijing, Shanghai and Hong Kong (Xin Dong Cheng, Ifa gallery, 10 Chancery Lane, Blindspot…), as well as 20 or so Western galleries such as A2Z Art Gallery, Paris-Beijing, Loft, Daniel Templon… This edition of the fair is also a reminder that many Chinese artists choose to live in Paris such as Zao Wou Ki (Galeri Bogéna) and Chu Teh Chun (Galerie Patrice Trigano) both of whom are close to lyrical abstraction. There is also Wang Keping (Galerie Zürcher and 10 Chancery Lane), the founder of the famous “Star” group, and Nobel prize winning artist and writer Gao Xingjian to whom Galerie Claude Bernard is dedicating its booth at the fair.

PROMISES
Successfully launched in 2013, this section is devoted to young galleries (less than 5 years in existence) and the discovery of new talents. Twelve galleries from Beijing, Brussels, Geneva, London, New York, Paris and Saint-Petersburg are taking part in the fair for the first time.

ARTDESIGN
This platform explores the relationship between contemporary art and design. This is the 3rd edition. It brings together a dozen galleries who present unique or very limited editions of original works make by contemporary talents. New in 2014:
The ArtDesignLab. Eight designers have been given carte blanche to undertake experimental research into what lies at the borderline between art and design. The Artdesign platform is supported by IDEAT Magazine and Maserati.

ART BOOKS FLAMMARION BOOKSHOP
In collaboration with the Art and Coffee Table section of the French national book publishers’ union and Flammarion Bookshop in Paris, ART PARIS ART FAIR has dedicated a specific space for art and artists’ books with some 30 publishers taking part. For the duration of the fair, artists, writers and art historians will sign their books and meet the public.
Alongside this, a special space has been designed to showcase art binding where a selection of outstanding contemporary bound works will be exhibited. The space is supported by the French fund for the development of illustrated books and original binding.

THE CONTEMPORARY ART BOOK BINDING SPACE
For the first time this year, Art Paris Art Fair is showcasing Art book binding. Thanks to the cooperation of a number of collectors, 50 or so of France’s most outstanding bound works are on show for the first time in a dedicated 200m2 space. This unprecedented exhibition has been made possible by l’Atemporel a non-profit organization dedicated to promoting exchanges between collectors and specialist binders.

CANSON® FUND FOR THE ART AND PAPER
The work of the five finalists of the 2014 Canson prize is showcased at ART PARIS ART FAIR.
The prestigious jury for this prize is presided by YAN PEI MING, a French artist of Chinese descent. The prize is awarded in recognition an artist whose work demonstrates a special, intimate relationship with paper. www.fondscanson.com