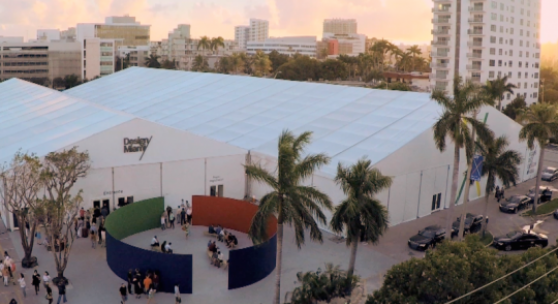 Gallery program proves great draw/ The 35 galleries selected for the 2014 edition came from as far afield as Seoul, Lebanon and South Africa and, for the first time, from as near as Miami’s own Wynwood art district. What they shared was distinctive individual vision and beautifully curated displays featuring the best in both vintage and contemporary collectible design. The result was a 12% increase in visitor numbers, bringing a total of 35,800 people to Design Miami/ 2014.

This December saw the launch of a new program titled Design Curio – cabinets of curiosity offering immersive environments that go beyond the traditional scope of the fair’s gallery programs. This year’s submissions included a virtual reality coral-eye view of the world, a shrunken architectural masterpiece, a space dictated by coolly regular grids and another dominated by the Memphis Group’s pop geometries.

Peter Marino received the inaugural Design Visionary award, which celebrates individuals who have significantly contributed to the field of design, such as collectors, curators, architects and luminaries who influence and are engaged in design in the broadest sense.

Marino was much in attendance, kicking off proceedings with an exclusive talk led by Architectural Digest Editor in Chief Margaret Russell. He also presented works from his collection in a leather-clad exhibition display, and participated in a standing room only Design Talk. Those who missed meeting the man in person snapped selfies with the architect’s waxwork, positioned amid infinity mirrors in his exhibition space.

Design Talks/
Highlights of the popular Design Talks program – which is presented by The Surf Club Four Seasons Hotel and Private Residences – included an exploration of the work championed by 1980s fire-brand design gallery Art et Industrie; David Adjaye and Theaster Gates discussing their future Chicago projects and social equity with Joseph Grima and Sarah Herda; and a fascinating conversation on the practice of Olson Kundig Architects, creators of this year’s extraordinary Collectors Lounge, 38 Beams. The lounge itself was home to well-received conversations with André 3000 Benjamin and Murray Moss and a portrait commission capturing visitors of note by Miami photographer Gesi Schilling.

Founding galleries/
Design Miami/ was particularly proud to welcome back to the fair 11 of the founding 15 galleries that first exhibited in 2005, which have contributed so much to the fair’s ongoing success. Nilufar Gallery, Casati Gallery, Cristina Grajales Gallery, Demisch Danant, Galerie kreo, Galerie Patrick Seguin, Jousse Entreprise, LAFFANOUR-Galerie Downtown, Magen H, R & Company and Hostler Burrows (exhibiting in 2005 as Antik) are now acknowledged as sites of pre-eminent expertise in their field, furthering not only the market for design but also the scholarship of it. Each of these galleries brought an exceptional presentation to this 10th anniversary edition of the fair, including three complete Mid-century university dorm rooms by Jean Prouvé, Le Corbusier and Charlotte Perriand at Galerie Patrick Seguin; a major display and re-assessment of New York’s Art et Industrie movement at Magen H; covetable anthropomorphic works by the Haas brothers at R & Company, and an exhibition of works commissioned for public spaces in France at Demisch Danant.