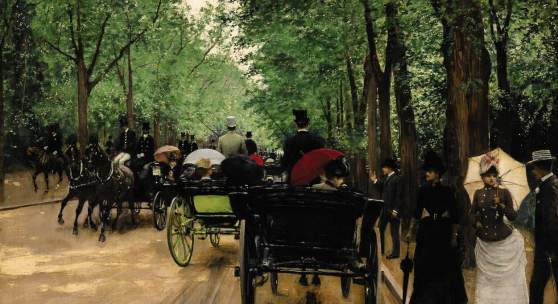 Sotheby’s New York auction of 19th Century European Art concluded today with a strong total of $14.3 million, among the highest results for this sale in recent seasons. The sale prominently featured Property formerly from the Collection of Margaret Thompson Biddle, which achieved $4.9 million – exceeding the collection’s overall high estimate – including the auction’s top lot: Jean Béraud’s Bois de Boulogne, which more than doubled its high estimate in selling for $1.8 million (estimate $600/800,000).

Mark Buck, Head of Sale for Sotheby’s 19th Century European Art Department in New York, said: “We were thrilled to offer works from the Biddle Collection today, including the finest group of paintings by Jean Béraud to come to auction in a generation. The works were super fresh, unseen for decades, and a global audience responded enthusiastically. Bidding was equally strong from Europe, Asia and America, and international bidding extended throughout the sale, leading to the day’s fantastic results. We have seen that great works of art transcend geographic limits, and that is also true for blue chip artists like William Bouguereau and Giovanni Boldini, who each saw worldwide interest”

Seth Armitage, Head of Research for Sotheby’s 19th Century European Art Department in New York, said: “Overall the sale was characterized by a quality and diversity of materials, which was in turn reflected in our strong sell-through rate. Outside of the Biddle Collection, highlights included Jules Breton’s Les communiantes, which fetched the highest auction price for the artist in over 25 years – nearly topping the longstanding record set by Sotheby’s in 1989. Similarly, Federico del Campo’s A View of the Grand Canal with the Palazzo Cavalli-Franchetti showed an appetite for works of extraordinary quality, and set a benchmark for the artist.”