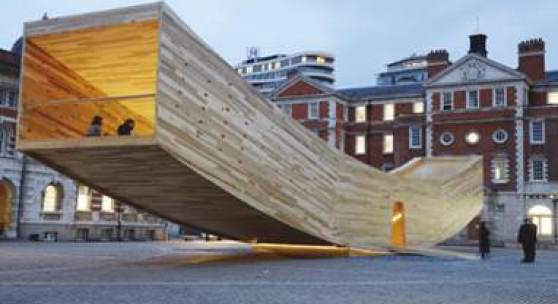 The annual London Design Festival has become one of the most influential events of its kind in the world, with 2016 marking the Festival’s fourteenth year. This year’s theme ‘Design is in the Detail’ was seen across the capital from the 17-25 September, with a programme of 563 projects and events including 329 events staged by Partner organisations – of these, 100 were partners taking part in the Festival for the first time. The total estimated direct audience for the fair was 375,000 people from over 75 counties.

This year saw seven Design Districts including a newcomer, the Brixton Design Trail, with a total of 212 design businesses participating in the Festival, each offering a programme of events, exhibitions, talks and tours. The V&A museum, the Festival’s main hub, received a total of 110,596 visitors over the duration of the Festival, and on Saturday 24 reached capacity and the doors were closed.

MINI Living scanned London for spatial potentials within the public realm and identified a network of three exemplary locations of underused public spaces within the city fabric. Three architectural installations with different interior landscapes yet all filled with plants were designed by Asif Khan to sit on nearby sites in Shoreditch’s busy city streets, offering visitors a temporary network of “third places” to connect, create and relax in an immersive atmosphere. The family of architectural “Forests” installations used plants to explore the relationship between public and private space in the city and demonstrate a creative approach to improving the quality of urban life. The plants themselves were curated by established Horticulturalist Jin Ahn from Conservatory Archives in Hackney and nearly 3000 plants were given away to visitors during the Festival allowing them to make the link between public and private spaces. During the Festival, several events took place in Vince Court that sought to demonstrate the overall concept of MINI LIVING - the urban relationships between work and play, public and private space, showing us how we can live in new collective ways.

The London Design Festival is renowned for its ambitious Landmark Projects. These major installations, first introduced in 2007, involve commissioning the world’s best designers, artists and architects, as well as pioneering new talents, to create something extraordinary. Appearing in some of London’s most prominent and best- loved spaces, the landmark projects demonstrate some of the most inventive ideas in design and have become the public face of the Festival.

Architect Alison Brooks’ Landmark Project for the London Design Festival, in collaboration with AHEC, was a spectacular 34m long, 3m high urban pavilion that takes the shape of a Smile. Located in the grounds of Chelsea College of Arts, The Smile represented an engineering feat for Arup as one of the most create the most complex CLT structures ever built. A four sided curved tube that curved upward to its two open ends, allowing light to wash across its floor. The Smile hovered 3m above the ground, while its two ends were viewing platforms that took in the sky and reach out to neighbouring buildings.

Made entirely of tulipwood, and a segment of a 100m diameter circle, the Smile delivered an immersive environment integrating structure, surface, space and light.

FOIL BY BENJAMIN HUBERT LAYER
One of the acknowledged highlights at the V&A was the collaboration between British design entrepreneur and founder of design agency Layer, Benjamin Hubert and iconic German brand Braun to create FOIL, an immersive installation located in the V&A’s Tapestries Gallery. The large scale installation comprised 50,000 mirror- finish stainless steel panels on a 20-metre by 1.2-metre undulating ribbon driven by a high-power motor in a constant motion. Light from LEDs reflected off the panelled surface to create a slowly morphing and evocative pattern of scattered light, moving across the walls and ceiling of the gallery. The installation was accompanied by an atmospheric soundscape which emulated the fluid motion of the sculpture and the reflected light.

THE GREEN ROOM BY GLITHERO
Taking full advantage of a six storey stairwell on the west side of the Museum, The Green Room was a monumental installation at the V&A conceived by London design studio Glithero in partnership with luxury watch maker Panerai. Renowned for their mesmerising, time-based mechanical installations, Glithero created a cylindrical curtain made up of 160 multicoloured silicone cords that made the most of the stairwell’s 17.5 metre drop. Each cord was connected to a central rotating cam arm that turned at a rate of one revolution per minute. One by one the strings were lifted, slowly rising 2.5 metres from their starting point before returning back down again, creating the effect of parabolic motion.