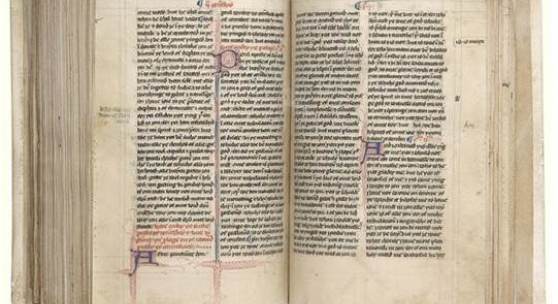 NEW YORK, 5 December 2016 – The Bible collection of renowned theologian and author, Dr. Charles Caldwell Ryrie, soared over pre-sale expectations today at Sotheby’s New York, realizing $7,341,818 (estimate $3.5/5.4 million). Over the course of four hours, 195 printed and manuscript Bibles in Hebrew, Greek, Latin, English and numerous other languages, as well as other theological works, were offered, led by the Wycliffite New Testament in the later version, in Middle English, which tripled its estimate and achieved $1.7 million (estimate $500/800,000). With many lots coming to the marketplace for the first time in decades, this impressive collection garnered interest from both public institutions and private collectors from around the world.

Selby Kiffer, International Senior Specialist, Books & Manuscripts, stated: “The outstanding result of today’s sale of The Bible Collection of Dr. Charles Caldwell Ryrie is a testament to the dedication with which this towering figure assembled his extraordinary group of Bibles and letters signed by theological figures. The sale followed a well-received exhibition that, despite the acclaimed Formatting the Word of God exhibition in 1998-99, marked the first time the full extent of the collection was revealed.”

The heart of The Bible Collection of Dr. Charles Caldwell Ryrie lies in early English translations of the Bible, including the top lot of today’s auction, John Wycliffe’s Wycliffite New Testament in the later version, in Middle English. Produced in England around 1430, numerous telephone bidders competed for this rare manuscript, finally selling for $1,692,500 against a pre-sale estimate of $500/800,000. Bible in English, Coverdale’s Version is another such example: faithfully and truly translated from Dutch and Latin into English, this first edition is one of the most complete copies to appear at auction in over twenty years, and sold for $348,500 (estimate $150/250,000).

Non-English Bibles, particularly manuscripts, also achieved significant prices. “The Benton Gospels” in Greek, written in Constantinople from the early to mid-10th century, realized $250,000 (estimate $50/80,000) while The Four Gospels, in Greek sold for $275,000 (estimate $50/80,000). Bible with Prologues and Interpretations of Hebrew Names, in Latin, hailing from Italy, hence the nickname [Italian Bible], obtained $200,000 in the New York salesroom this afternoon.