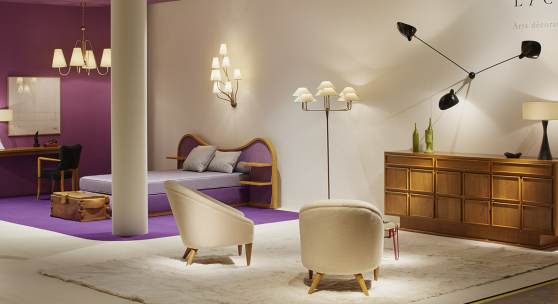 René Kamm, Chief Executive Officer of MCH Group (Co-owner of Design Miami/), said, “Design Miami/ continues to grow and attract wider audiences for its specialized and unmatched offering in design. With greater attention on its gallery exhibitions and programming internationally, it is no surprise that critical reception this year has been resoundingly positive. Design Miami/ has confirmed its place as the highest-quality fair for collectible design in the world, and we are delighted to witness this continued ascendance.”

“The fair’s continued growth is both supported and evidenced by the quality of partner programming and satellites that enhance and diversify the exhibitions,” said Jennifer Roberts, Chief Executive Officer of Design Miami/. “This year, we introduced a multiyear partnership with Calvin Klein under the visionary direction of Raf Simons, which integrates seamlessly with the gallery program. We look forward to continued collaboration with brands as dynamic and influential as Calvin Klein.”

Rodman Primack, Chief Creative Officer of Design Miami/, said, “For me, after five years, this June felt like a good moment to reflect a bit. François Halard’s curation of and personal exhibition within Design at Large was fundamentally about time, about both looking ahead and looking back at how design shapes our experience, hopefully for the better. His exhibition at the entry of the fair established a structure for the entire endeavor, allowing the historic material to provide context for contemporary work while the contemporary gives us insight into the future. At Design Miami/ we constantly endeavor to not only show collectible design, but also to impact the world around us through augmenting our knowledge and understanding of how good design allows us to live better. This annual meeting of the world’s greatest collectors, curators, and institutions in Basel is an excellent opportunity to push each other forward.”

The material on view in this edition sets Design Miami/ apart for a wider audience, but also across a wider span in time. With the first ever presentation of ancient material at the fair, Origins: Design from the Ancient World, a Curio presentation by Oscar Humphries in partnership with Galerie Chenel, work dating from 400 BC was on offer and of note were two Roman marble entry columns. On the other end of the spectrum, entirely new bodies of work were conceived to debut at the fair. These included Shape of a River Series by South Korean artist and designer Kwangho Lee at Salon 94 Design and Watercolour Collection at Friedman Benda by Japanese design studio nendo, who spent more than two years developing the series of delicate metal furniture pieces inspired by watercolor painting.

Special commissions dating much earlier than those developed with Design Miami/ Basel in mind also made an impression, with several privately held works shown publicly for the first time. Galerie Mitterrand offered a bed by Claude Lalanne in cast bronze, a commission for a Paris-based collector in 1997, the asking price of which was the highest of the fair at €1,500,000. At Galerie Jacques Lacoste, a commissioned set of needlepoint sofas, armchairs, and bench by Jean Lurçat was brought to market for the first time since they were custom designed for George Salles in 1927 when he was Chief Curator of the Louvre. Also at Lacoste was a dining table by Pierre Chareau, which sold this week on its first outing since 1932 alongside a set of dining chairs by René Herbst. A number of rare pieces were sold at both LAFFANOUR–Galerie Downtown and Galerie Patrick Seguin of Paris as well as R & Company and Salon 94 Design of New York.

Lee Mindel, New York–based architect and scholar, said of the exhibition program of this edition: “We are in ever changing times . . . challenging times. Historically, times of struggle have provoked new directions, thoughts, and inventions. We also see this today at Design/ Miami Basel 2018, which was one of the most inventive, informative, and thrilling expressions of a century of sociopolitical culture being translated through the decorative arts. We see how technology can make us more humane, how new materials expand possibilities, how nature emerges as a muse. As more and more galleries present contemporary design alongside twentieth-century icons, we keep sight of the fact that the best of the past surrounded by the best of the future gives us an understanding of where we’ve come from and where we’re going.”