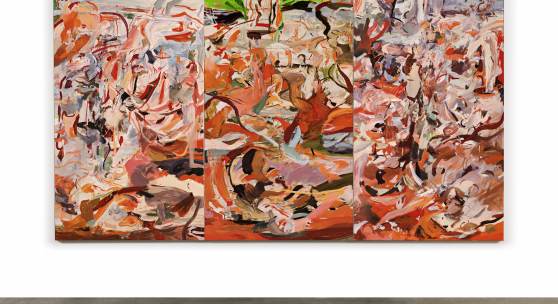 Cecily Brown’s Captivating
Have You Not Known, Have You Not Heard from 2011
Sells for $3.7 Million
**
Martin Wong’s
Ten Brooklyn Storefronts
Achieves an Outstanding $884,000
*More Than Five Times the Artist’s Previous Auction Record*

NEW YORK, 27 September 2019 – Yesterday in New York, Sotheby’s first Contemporary Art auction of the fall season totaled an impressive $32.7 million – the third consecutive Contemporary Curated sale in New York to achieve more than $30 million and the second-highest total for the sale series since it began in 2013.
Charlotte Van Dercook, Head of Sotheby’s Contemporary Curated auctions in New York, remarked: “We are very pleased with the results from yesterday’s sale. This season, we were excited to continue the strong momentum of our past two seasons, establishing our third consecutive sale total over $30 million and our second-highest total for the Contemporary Curated sale series in New York. With five paintings achieving prices over $1 million, we saw robust bidding on many of our top lots, including multiple collectors vying for the Cecily Brown, Kerry James Marshall, Jeff Koons and Ed Ruscha. It is with these strong results that we look forward to our Contemporary Art auctions in London next week during Frieze, and our fall sale series in Hong Kong.”

This season’s Contemporary Curated sale was led by Cecily Brown’s powerful Have You Not Known, Have You Not Heard, which bested the $3 million high estimate to achieve $3.7 million. Fantastically expressive and irresistibly bold, the commanding oil on canvas exemplifies Brown’s prodigious fusion of rich gestural abstraction with figurative allusion. Executed in 2011, the present work exudes an unbridled sense of visual pleasure and roots itself to the canon of art history, mining masterpieces of the past to forge a line towards the present in this tour de force of painterly delight. A triptych of monumental proportions, the painting derives its title from Isaiah 40:28-31, a Biblical verse that exalts God’s glory; Have You Not Known, Have You Not Heard’s three-panel format, which was historically reserved for Christian altarpieces, echoes the work’s nod to the influence of Western religiosity on the history of art.

Another highlight from sale was Kerry James Marshall’s Untitled (Self-Portrait) Supermodel, which sold for $1.6 million (estimate $800,000/1.2 million). In the present work on paper from 1994, Marshall uses the figure of the supermodel to engage other archetypes to propose broader questions about the foundations of beauty in culture: the figure has flowing, spectral hair that falls in waves, contrasting their rich charcoal skin tone. This semi-translucent hirsute layer partially conceals the silhouette of Marshall’s head underneath, while hinting at the contours of an Afro, parting to highlight the elegant cheekbones and pointed chin of the artist’s feminized appearance. Underneath Marshall’s face, a field of white paint has the names “Kate,” “Kathy,” Cindy,” and “Linda,” incised into its surface – a nod to the leading supermodels of the 1990s, so omnipresent in the time the work was executed that they were identifiable through mononyms.

In addition, three other works achieved prices in excess of $1 million: Ed Ruscha’s monumental canvas, Please Note from 1990, that brought $1.5 million; Jeff Koons’s Beach from 2001 that fetched $1.3 million; and Sam Gilliam’s resplendent Ray VIII from 1970 that sold for $1.1 million, outshining the $800,000 high estimate.

One of the most surprising moments of yesterday’s sale occurred during the morning session, when a 10-part canvas by Martin Wong, Ten Brooklyn Storefronts from 1985, soared past the $80,000 high estimate to sell for an outstanding $884,000 – a new auction record for the artist and more than five times the previous benchmark price for any work by Wong.

Further highlights from the sale included strong results for works from distinguished private collections: 13 pieces that were donated to Stop Bladder Cancer – a charitable sequence organized by artist Ugo Rondinone, who was diagnosed with high-grade bladder cancer in 2017 – together achieved $1.1 million; while the first group of works on offer from the collection of Ryan Brant were 100% sold, totaling $846,750.

Sotheby's is pleased to present our September Contemporary Art Online auction, now open for bidding through 2 October. Including works by renowned artists such as Sam Gilliam, Lee Bontecou, Christo, Jean-Michel Basquiat, Richard Hambleton, Adam Pendleton and Raymond Pettibon, among others, the sale offers collectors at all levels the opportunity to acquire works at accessible price points below $100,000.

The sale also includes works from prominent collections including those of David Teiger and Dr. David Sanders & Prof. Jesse Dukeminier. A selection of highlights will be on view in our New York galleries until 2 October, with other works available to be viewed at our New York offices.