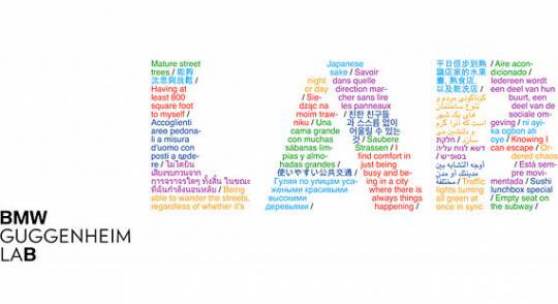 ON AUGUST 3, BEFORE TRAVELING TO BERLIN AND ASIA

Over the six-year migration of the BMW Guggenheim Lab, there will be three different themes and three distinct mobile structures, each designed by a different architect and each traveling to three cities around the world. The inaugural BMW Guggenheim Lab will be located on the border between Manhattanʼs Lower East Side and East Village, at 33 East First Street (between First and Second Avenues), on a site owned by the New York City Department of Parks & Recreation.

The first cycle will conclude with a special exhibition presented at the Solomon R. Guggenheim Museum in New York in 2013, which will explore the ideas and solutions that were addressed at the BMW Guggenheim Labʼs different venues. The two remaining two-year cycles will be announced at a later date.

The theme for the first three-city cycle is Confronting Comfort, an exploration of how urban environments can be made more responsive to peopleʼs needs, how a balance can be found between modern notions of individual versus collective comfort, and the urgent need for environmental and social responsibility.

An international Advisory Committee has nominated the New York BMW Guggenheim Lab Team (BGL Team), an innovative group of emerging talents in their fields who will create the diverse range of programming that will be presented in New York.