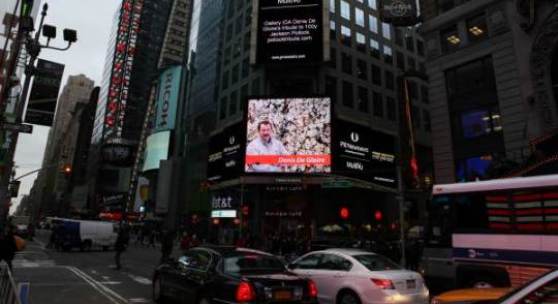 It is no coincidence that Denis De Gloire is shining on Times Square in New York, as he brought an impressive homage in the halls of the Belfry in Bruges, dedicated to the 100th birthday on 28 January of Jackson Pollock, creator of Action Painting, who died in a car crash in 1956.

For this occasion, painter Denis De Gloire, his coach Dan Cornette of Galerie IDA and Art Promotion Tuteleers&Tuteleers realised an exhibition that is definitely unique both wmaterially and spiritually.

Denis De Gloire succeeded in giving the term and idea of ‘Action Painting’ a fresh and astonishing contemporary allure.

The astonishing aspect was expressed grandly in the 13th century upper room where four literally and figuratively monumental canvases, each eight by three metres, had been installed. They represented the four seasons in a respectively serene, fresh, passionate and meditative interpretation: the luminescence of snow and ice and the slender slant of plants and crops, the fiery power of the summer and the introverted loss in the autumn (it is a detail of autumn that shone on Times Square). The four paintings set the tone and prepared the visitor for what he would be seeing in the next exhibition halls, where fifty canvases displayed the spirit of action painting in several guises: fiery and passionate, more ethereal with sudden areas of colour, daring in the use of colour, heavy and light matter, painted on the floor with dripping paint or with delicate brushes, built up tenderly and carefully as on an easel.

This indicates what a gifted painter Denis De Gloire is, how he, as an excellent colourist, exceeds the concept of homage and profiles himself as a fully-fledged representative of a tempestuous and spiritually superior action painter.

This exhibition was a huge event and a true revelation in the world of painting; this was proved by its many visitors in word and deed. More than thirty canvases were sold during the exhibition.