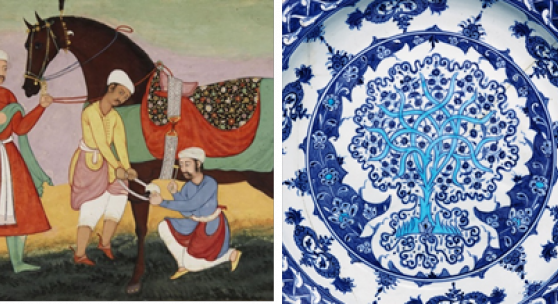 The interwoven artistic traditions of multiple continents from the ninth century to the present day are represented in the upcoming week of Art of the Middle East & India at Sotheby’s London. A unique group of four fascinating sales, ranging from the contemporary to the ancient, will be accompanied by a programme of talks and lectures by leading scholars of the region.

Formed over four decades, The Khosrovani-Diba Collection comprises predominantly Indian miniatures by Mughal masters as well as fine paintings and works of art of the Rajasthani, Pahari and Company Schools. Each work in the prestigious collection was chosen with an eye for quality, rarity and historical importance, and the auction comprises thirty-five beautifully-preserved pieces.

A vibrant and exciting international platform for modern and contemporary arts from North Africa, Turkey, the Middle East and Iran in London, Sotheby’s 20th Century Art / Middle East auction on 20 October will once again star highly-sought after masterpieces. The auction will comprise seminal works by the most celebrated artists from the region, from Monir Farmanfarmaian and Ali Banisadr to Bahman Mohassesand Shakir Hassan Al Said – led by the first marble sculpture to appear by Mahmoud Mokhtar at auction.

Arts of the Islamic World will present rare and exquisite objects that tell the story of over a thousand years of artistic exchange and influence in the Islamic world. The sale will open with a selection of fifty manuscripts and calligraphies from the renowned collection of the late Jafar Ghazi. Each of these works bears witness to the high esteem in which calligraphy was held in Turkey, the Middle East and Persia from the medieval period up until the end of the Ottoman era. Further highlights include a beautiful turquoise-set and enamelled necklace from North India and a silver-inlaid tray stand from Mamluk Egypt typifying the calligraphic monumentality so favoured by high-ranking patrons.

The auction of Modern and Contemporary South Asian Art includes a truly impressive range of paintings and sculpture by Modern masters, from storied collections with impressive provenances. Leading the sale is a luminescent and meditative Vasudeo S. Gaitonde painting from1973, which displays the artist’s distinctive horizontal graduating bands of colour.