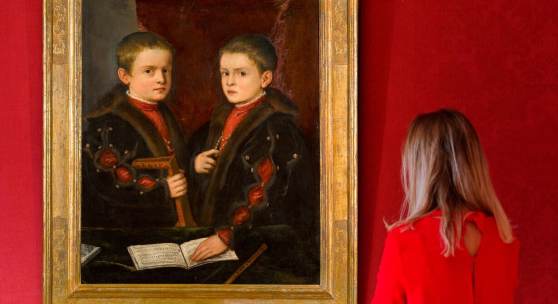 Early Italian paintings and Flemish masterworks have become two of the most desirable areas in the Old Masters market, often finding their way into wide-ranging collections, often alongside Contemporary Art. Sotheby’s Old Masters Evening sale in London on 7 December will present collectors with a rich selection of Italian Renaissance masterworks and Dutch and Flemish paintings from the Golden Age, many of which have remained in prestigious European private collections for centuries. Among these works are two exceptional early Italian Renaissance portraits: one by Titian and his studio, another by an artist rarely seen at auction, Lorenzo Lotto. These feature alongside a magnificent flower still life by Ambrosius Bosschaert the Elder and two magnificent Italian 15th century gold-grounds, unseen on the market for over 100 years. The sale also includes a section entirely dedicated to the Dutch and Flemish painters influenced by Pieter Brueghel the Elder, led by one of the finest known versions of Pieter Brueghel the Younger’s most popular compositions: a more-than-merry procession of villagers returning from a village fête.

Commenting on the forthcoming sale, Alex Bell, Joint International Head and Co-Chairman of Sotheby’s Old Master Paintings Department said: “Collectors from past and present share a continuity of vision and a thirst for works with powerful imagery and timeless beauty. Many works in the sale will no doubt resonate with today’s audience: Titian’s creative genius and the bond he captures between two brothers are as strong today as when Sir William Forbes acquired the work in the early 19th century; Lotto’s wonderfully quirky image of an architect has the same unconventional and dominating presence as it had 500 years ago. It is also fascinating to see what enticed a painter like Franz von Lenbach to buy the two fabulous Italian gold-grounds in the sale and how Pieter Brueghel the Younger’s superb draughtsmanship and understanding of composition are still so evocative.”