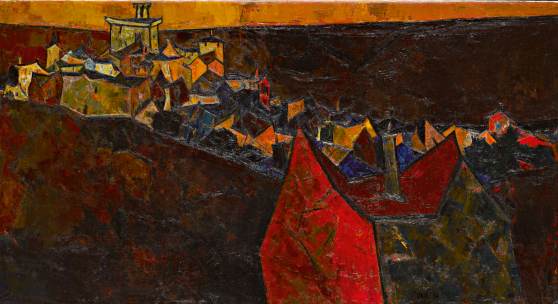 NEW YORK, 20 February 2018 – Sotheby’s is thrilled to unveil the full offerings of Modern & Contemporary South Asian Art. Held annually in New York during Asia Week New York, the 2018 edition will feature outstanding examples by leading modern artists including Sayed Haider Raza, Raja Ravi Varma, and Maqbool Fida Husain, as well as original photographs from contemporary photographers such as Raghubir Singh and William Gedney. Numbering over 70 lots with a total estimate of $4.7/5.6 million, doors will open to the public on 14 March, ahead of the auction on 19 March.

Anu Ghosh-Mazumdar, Head of the Indian, Himalayan & Southeast Asian Art Department in New York, noted: “Building upon significant prices achieved last March for Maqbool Fida Husain and Raja Ravi Varma, we have curated this season’s auction with treasures by top artists alongside 19th and 20th century photography by the greats in their field. We look forward to sharing highlights in our upcoming exhibition in Delhi, and showcasing the sale in its entirety to our New York and North American audience this March.”

HIGHLIGHTS
The top lot of Modern & Contemporary South Asian Art is Sayed Haider Raza’s exquisite Ville Provençale (estimate upon request). Painted in 1956, six years after the artist’s move to France, this landscape painting was exhibited later that year at the Venice Biennale where India was a participating country for just the second time. Depicting a traditional French village, the oil painting superbly combines his background in Raiput miniatures with his admiration for the works of Paul Cézanne and Vincent van Gogh, in particular their color structure and formalism.

Also by Sayed Haider Raza is La Terre, executed at the height of his career in 1980 (estimate $500/700,000). Nearly three decades after the completion of Ville Provençale, La Terre illustrates Raza’s artistic return to India, demonstrated by the growing influence of Hindu, Buddhist and Jain philosophies as well as the impact of the natural world. The painting also embodies the artist’s progression from figuration towards abstraction; in the present work, geometric shapes of reds, golds and oranges replace the trees that collectively create the forest, consequently creating a distinctive landscape of rhythm and color.

Raja Ravi Varma, a National Art Treasure artist whose works are seldom offered at international auction, makes an appearance this season with Untitled (Tillottama). Following in the footsteps of Untitled (Damayanti), sold last season for a remarkable price of $1.7 million, the present work carries a pre-sale estimate of $400/600,000. Painted circa 1896, the luminescent portrait of Tilottama – a celestial nymph from Hindu mythology – is characteristic of the artist’s oeuvre; by combining Western Academic Realism with markedly Indian subjects, and unexpected combinations of colors, Ravi Varma’s works of art remain timeless and uniquely his.

Bikash Bhattacharjee’s command of realism shines through in his Untitled (Rooftops) from 1964-72 (estimate $120/180,000). The artist is one of India’s most skilled 20th century painters and the present work comes from an early cityscape series showcasing his hometown of Calcutta. The stark contrast between light and dark, the use of empty space and the absence of humanity combine to create a mystical environment that seems to only exist in the artist’s mind. Poignant and moving, this large-scale work of art is one of Bhattacharjee’s most powerful paintings, and comes to auction from the collection of two of his earliest patrons, Helen and Herb Gordon.

The Modern & Contemporary South Asian auction will, for the first time, also feature a group of 19th and 20th century photography. The images are led by Raghubir Singh’s Farmer Dredging Loam, Dal Lake, Kashmir from 1980, which is indicative his oeuvre of photojournalistic landscapes and views of local people (estimate $18/25,000). Featured in major publications such as Time, National Geographic Magazine and The New York Times, Singh’s photography now resides in institutions such as the Museum of Modern Art, New York, the Art Institute of Chicago, and the Metropolitan Museum of Art, which recently held an exhibition of his photographs entitled Modernism on the Ganges in the Met Breuer building.