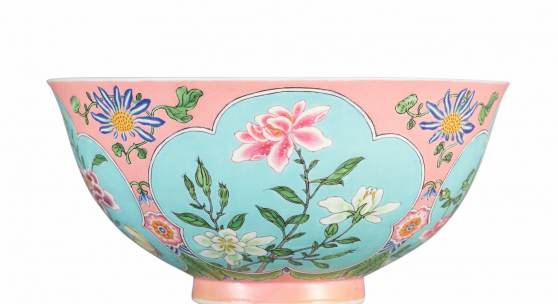 Hong Kong, 1 March 2018 Sotheby’s Hong Kong Chinese Works of Art Spring Sale Series 2018 will take place on 3 April at Hong Kong Convention and Exhibition Centre. The series will be led by the superbly enamelled, fine and exceedingly rare H.M. Knight Pink-Ground Falangcai Bowl (pictured above), a rediscovered imperial heirloom handscroll by Qian Weicheng, bequeathed by the last Emperor Pu Yi to his younger brother Pu Jie (dedicated release available upon request) and sutras. Anchored by a strong line-up of Qing pieces, the series of six sales will offer about 300 lots with a total estimate of nearly HK$730 million / US$93.5 million*.

Nicolas Chow, Deputy Chairman, Sotheby’s Asia, International Head and Chairman, Chinese Works of Art, comments, “There is extraordinary quality and breadth in our offerings of Chinese art this season, with possibly the finest assemblage of Qing porcelain on offer in recent memory. The H. M. Knight Gold-Pink Falangcai Bowl ranks without question among the very finest Imperially enamelled porcelains made for the personal use of the Kangxi emperor, whilst the Ruby-Ground Sgraffito bottle vase and the unusually large Lemon-Yellow Ground and Blue Tianqiuping both testify to the exceedingly high levels of craftsmanship achieved at the Imperial kilns during the reign of the Qianlong Emperor. The two magnificent sets of Imperial Wisdom Sutras, by Imperial order of the Ming Emperor Xuande in the first part of the 15th century, are the finest manuscripts to have been produced during the dynasty and no Chinese manuscript of this importance has ever been offered at auction.”

Depicting ten landscapes, this highly important handscroll is the greatest masterpiece of the renowned Imperial court painter Qian Weicheng, which has re-emerged after a hundred years. Qian Weicheng, the highest-ranking candidate in the official examinations, was a favourite of the Qianlong Emperor, and was always selected to accompany the Emperor on official grand Southern Inspection tours, during which the Emperor would don the attire of a commoner and conceal his imperial identity. Hence, the piece is a vessel of nuanced political statement as it asserts the Qianlong Emperor’s ownership and reign over the vast wealth of lands in China. In particular, the ten poems written by the Emperor inscribed on the scroll records his appreciation of the landscapes of Taishan, which he surveyed on tour on multiple occasions during his lifetime, and commemorates Qian Weicheng, his favoured artist at court. The present scroll was recorded in The Sequel to the Previous Collection of the Stone Canal Pavilion, and was originally kept in the Ningshou Gong of the Forbidden City. It was then bequeathed by the last Emperor Pu Yi to his younger brother Pu Jie in the early 1920s, in an attempt to curb the rampant theft of Palace treasures by court eunuchs. (Dedicated Release Available upon Request)

Estimate upon request
This magnificently enameled pink-ground bowl is without question the finest example of its type and the only ever recorded with this design. There exists however a closely related example, the pride of the National Palace Museum, Taipei, which is painted with different flowers but the exact same colour ground. Given the rarity of the colours used and the admirable perfection of the firing, it is likely that the two were painted and fired side by side. Thrown and fired by potters at the Imperial kilns in Jingdezhen, the bowls were then painted in the Imperial Palace workshops in the Forbidden City in Beijing, possibly by Jesuits resident at the court of the Kangxi emperor, and fired a second time. The present bowl once belonged to the celebrated collector Henry M. Knight and has not been seen on the market for over thirty years, and can be traced all the way back to Shanghai, 1930.

THE LOST WISDOM SUTRA: A TREASURE FROM THE GOLDEN AGE OF XUANDE (HK0792)

A legacy of the Golden Age and the only surviving example outside of the National Palace Museum, Taiwan, this outstanding relic of the Xuande period is indisputably the most important Chinese manuscript ever to appear at auction. Buddhist Sutras are canonical scriptures that render the teachings of the Buddha, which were taken over from India and translated. Their copying and propagation – like the commissioning of Buddhist images – is considered a meritorious practice. When such deeds are performed by an emperor, the resulting works are inevitably of the highest standard in terms of the materials used and the artists and craftsmen employed. As such, these two sets of albums from the Prajnaparamita Sutra, the Sutra of Perfection of (Transcendent) Wisdom, commissioned by the Xuande Emperor (r. 1426-1435), reflect the breathtaking level of imperially sponsored artefacts in the first decades of the 15th century.