'The Beautiful and Damned' at Sotheby's This November 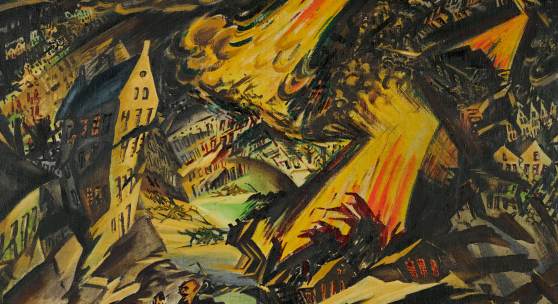 INCLUDING:
Marsden Hartley’s 1913 Modern Masterpiece PRE-WAR PAGEANT A Critical Example from His Renowned Berlin Pictures And the Finest Painting by the Artist Ever to Appear at Auction

“The enormous psychological upheaval engendered by the Great War is vividly documented in the artistic production of the time, with artists responding variously with optimism, despair, and – very often – a desire to rip up the old and start anew. It is no coincidence that many of the greatest masters of the period, and many of the most ground-breaking ‘schools’ of the 20th century, found their voice at this critical moment, which saw the birth of Expressionism, Futurism, Cubism, Dadaism, and so many more.” – Julian Dawes, Head of Sotheby’s Impressionist & Modern Art Evening Sale in New York

NEW YORK, 14 September 2018 – This November, as the world pauses to remember the events of the First World War on the centenary of the Armistice of 11 November 1918 that drew it to a close, Sotheby’s will bring together a group of works that illustrates the tremendous and varied impact of the War on the artistic production of those whose lives it transformed.

Incorporated into Sotheby’s Impressionist & Modern Art Evening Sale in New York on 12 November 2018, the offering will assemble works that capture the period from immediately prior to the outbreak of the war through to its aftermath, together telling the artistic history of that momentous period. The works will be presented under the moniker The Beautiful and Damned, in reference to the 1922 novel by F. Scott Fitzgerald – the title of which alone captures the vicissitudes of the time.

Today Sotheby’s announces a number of works that will highlight The Beautiful and Damned this fall:

Marsden Hartley’s triumphant Pre-War Pageant is a seminal painting in the development of Modern art, and represents one of the first examples of an American artist working in a purely abstract idiom. The canvas, which retains its original artist-painted frame, hails from a groundbreaking group of paintings that Hartley produced in Berlin between 1913 and 1915 – the majority of which reside in museum collections including The Metropolitan Museum of Art, New York, the National Gallery of Art, Washington, D.C., and the Whitney Museum of American Art, New York. Coming to auction this November from the collection of Ed and Deborah Shein, this magnificent painting presents diverse iconography and influences throughout: from Native American culture to Prussian military pageantry, mystical and universal symbols and more. Estimate in the region of $30 million – dedicated release attached

Executed in 1912 near the brink of the Great War, Ludwig Meidner’s dual-sided painting Apokalyptische Landschaft (Apocalyptic Landscape) is one of approximately 15 paintings from Meidner’s series of apocalyptic landscapes, depicting a cataclysmic and arresting urban scene that reflects the social, political, emotional and artistic upheaval in Germany at the time. With his tremendous visionary powers, Meidner anticipates the destruction of Europe and the recurrent conflict that was to blemish the future course of the 20th century. There are very few works from the series remaining in private hands, with important examples in international institutions including the Neue Nationalgalerie Berlin and the Los Angeles County Museum of Art (LACMA). Estimate $12/18 million – dedicated release attached

Another addition to The Beautiful and Damned ensemble is Franz Marc’s Kühe. With its spectacularly rhythmic composition, comprised of dazzling, overlapping angular areas of color, Kühe explores the central subject of Franz Marc’s oeuvre: the animal world. Executed in 1912, at a crucial moment in his career immediately following the formation of Der Blaue Reiter, Marc gifted the work to his friend and fellow artist Albert Bloch – the only American to exhibit with Der Blaue Reiter. Bloch and Marc corresponded throughout the war, and Bloch received his final postcard from Marc the day that he was killed during the Battle of Verdun in 1916. Bloch kept this painting in his collection for the remainder of his life, and it is on offer this November from The Albert Bloch Foundation. Estimate $1.5/2 million