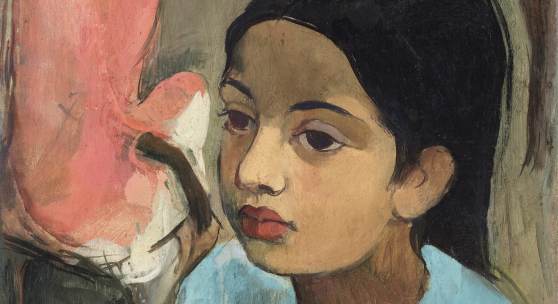 Earlier this year, Sotheby’s announced plans to launch auctions in India with an inaugural sale set to take place in Mumbai on 29 November 2018. Now, the full array of artworks to be offered in the Boundless: India auction is revealed for the first time.

One of the star lots is by the National Treasure artist Amrita Sher-Gil. In an extremely rare appearance of the artist’s work at auction, her exquisite painting ‘The Little Girl in Blue’ has remerged eighty years after it was last seen in public. Painted in India in December 1934, when the artist was just 21, this is only the third oil painting by Sher-Gil to come to auction in India, and the seventh offered anywhere in the world. ‘The Little Girl in Blue’ has been treasured in the same family collection ever since it was acquired at the artist’s first solo show in 1937 by Charles Fabri – an eminent art critic who is rumoured to have become the artist’s lover. (please see more in the press release attached)

The sale is also distinguished by nine lots belonging to Balkrishna. V. Doshi, one of the world’s greatest architects and the only Indian to be awarded the highly prestigious Pritzker Architecture Prize. The sale includes paintings, drawings and furniture created by B.V. Doshi himself, alongside a selection of works from his prized collection. He built his collection with the same delight, passion and inquisitiveness that marks out all great collectors. Like his buildings, the collection presented here is refined, theatrical, and forward-looking.

Yamini Mehta, International Head of Indian and South Asian Art at Sotheby’s: “With Boundless: India we celebrate the storied past and bountiful future of Indian art through the 20th centuries. We look at the onset of independence in 1947 and how it brought about a veritable renaissance in the art scene, as well as acknowledging exceptional works by leading Contemporary artists practicing today. This pantheon includes Amrita Sher-Gil, a rebellious libertine well ahead of her time, and portentously trying to make the most of her short time on earth. The carefully chosen works to appear in this auction have many interwoven connections between the influences of Europe and between the worlds of design, architecture and photography. The works by leading international photographers are prime examples of the dynamism and inspiration that artists from across the world received from India. Boundless is ultimately about opening the eyes to the beauty of Indian art and the culture inspired by the Subcontinent in all of its manifestations.”

‘Boundless: India’ will comprise 60 lots spanning Modern and Contemporary South Asian Art, photography, design and sculpture. Together, they are estimated to make INR 43.1- 62.9 crores / US$ 6-8.7 million.