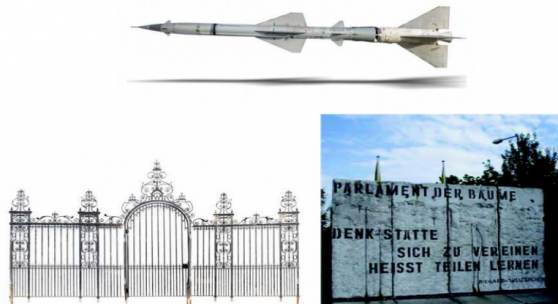 Summers Place Auctions' next sale on Tuesday, 12th March (followed by the sealed bid sale on Wednesday,13th March) will include several lots of historic importance. There are two sections of the Berlin Wall for sale – 30 years after the historic moment when the borders opened and the wall 'fell' on the 9th November 1989 and as such symbolising the end of the Cold War.

The two lots in this auction had originally been part of a memorial to the hundreds of people killed at the Wall trying to escape to freedom, called the Parliament of Trees, in the middle of Berlin opposite the Reichstag. German artist and environmental activist Ben Wagin painted his powerful messages over these sections of the Wall in 1990 after initial visitors had chipped off the original graffiti - creating a uniquely textured surface. The effect is as dramatic as it is powerful. These parts of the original memorial had to be removed to make room for additional constructions. The wall is covered with a quote by the German President at the time, Richard von Weizsäcker, who said: "To unite means to learn to share." The reverse shows graffiti 'Berlin November 1989'.

Parts of the wall are now scattered all over Germany and the rest of the world, with some important large scale installations, like these on offer, on view at the World Trade Centre in Montreal, donated to the city in 1992, and in Seoul, South Korea, where a three section portion of the wall stands in Berlin Square. It was brought to Seoul in 2005 as a gift from the City of Berlin to inspire South Koreans to hope for a similar reunification with North Korea in the future. Closer to home a single section stands outside the Imperial War Museum, London.

The section with the Richard von Weizsäcker quote is estimated to sell for £12,000- 18,000, while the smaller section with the graffiti ' Erde werde Erde' is expected to sell for £5,000-8,000. (see separate release for more details) In keeping with the Cold War theme, there is also an opportunity to bid for a rare Lavochkin V-751 experimental flying laboratory, basically a two-stage rocket with an initial solid fuel rocket booster which burned for four seconds and a second stage liquid fuel engine that burnt for a further 22 seconds. Made of titanium, stainless steel and aluminium and an impressive 10.9 metres long, it was built in 1960 and able to reach altitudes of 66,000 feet and speeds of Mach 3, the range could be up to 22 miles. This rocket is part of the S-75 family of rockets which were developed in the late 1950 's in response to combat America 's long range bombers. The S-75 and its many variants provided much of the air defence of the Soviet Union and numerous other countries which adopted it. Perhaps its most famous moment was the shooting down of Gary Powers U-2 spy plane in 1960. It is estimated at £8,500-11,500.

With plenty of talk about walls, walls do need gates and the Spring Sale offers a great opportunity to purchase two identical, impressive pairs of Georgian style wrought iron gates and a similar Georgian style entranceway with great provenance. The gates used to be at Easton Lodge, Great Dunmow, Essex, England. One of the many country houses destroyed during the 20th century and only part of the west wing (rebuilt as a separate house after a fire in 1918 for use as servants' quarters) still stands. It is, however, still of importance due to the Grade II listed gardens designed by Harold Peto, which have been largely restored and opened to the public.

The two pairs of gates are from the last quarter of the 19th century and surmounted by an earl's coronet flanked by pilasters with supporting back struts. They are each 260cm high by 320cm wide. Each pair of gates is estimated at £15,000-25,000. The impressive entranceway with a central hinged gate with an over 4 metre-high overthrow incorporating a 'W' for Warwick, is also expected to sell for £15,000 – 25,000.

Most famous of those who lived at the house was Daisy Greville, Countess of Warwick, who was born Frances Evelyn Maynard at Easton Lodge in 1861 and inherited the estate when just four years old. She became a socialite and mistress to King Edward VII, and continued to live at Easton Lodge with her husband, the 5th Earl of Warwick after her marriage. As a result, the Lodge became famous for its society gatherings. Guests who would have been driven through the Gates at Easton Lodge included George Bernard Shaw, Gustav Holst, Ramsay McDonald and HG Wells whose family lived in one of the estate properties. The Earl, in turn, received visits from such notables as Dame Ellen Terry, AA Milne and Charlie Chaplin. In 1918, a fire severely damaged the Jacobean wings of the house, thought to have been started by one of the Countess's pet monkeys. Major portions of the Estate were auctioned in 1919/20 and outlying parts had already been sold in the 1890's. In 1923, Daisy offered the whole estate to the Labour Party - they declined. She stood for Parliament as Labour candidate for Leamington & Warwick but lost out to Anthony Eden. Such was her commitment that in 1926 she then offered the entire estate to the TUC who were very keen to accept. Plans were made to develop Easton Lodge into a college and university but, after the General Strike in 1926 through which the TUC's funds were severely depleted, the arrangement had to be abandoned as they were no longer able to finance such an institution.

During World War II the estate was requisitioned by the War Office, leading to the destruction of some 10,000 trees to enable the construction of RAF Great Dunmow (also known as RAF Little Easton) in the former park. The house was largely demolished following its return by the military in 1950.