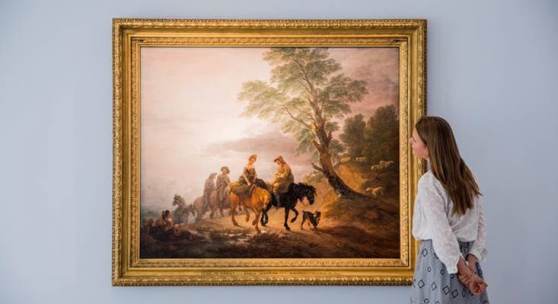 26 June 2019: This summer, Sotheby’s will present a roll-call of the greatest names in Western art history at its flagship Old Masters Evening Sale on 3 July. With an overall estimate of £46-65.9m/ $59.5-83.7m, the sale next week is one of the strongest sales ever staged in this category, both in value as well as in the quality of works on offer. From some of the finest works by the three key British landscape painters remaining in private hands, to masterpieces and newly discovered works by Renaissance and Baroque masters, the sale features works by the biggest household names spanning six centuries, including:
Thomas Gainsborough’s Going to Market, Early Morning (est. £7-9m): one of the finest masterpiece by the artist remaining in private hands and one of the finest British landscapes by any artist likely to ever come to market. Painted in 1773, the work is one of an important group of three landscapes from the same moment showing travellers going to or returning from market. The subject and composition of the picture demonstrate Gainsborough’s natural affinity with, and sympathy for, the rural poor and the landscape.
J.M.W. Turner’s Landscape with Walton Bridges, (est. £4-6m), a rarely-seen late work by the artist which foreshadows the advent of Impressionism just a few decades later. One of only a handful of late works by the artist left in private hands, this painting belonged first to Turner’s landlady and partner Sophia Booth. It was later bought by one of the greatest collector in American history, becoming one of the jewels in the crown of the celebrated Morgan Collection in New York.

Peter Paul Rubens, Head of a Young Warrior (est. £2.5-3.5m): Painted in the early 1610s, Head of a Young Warrior shows Rubens in complete control of his medium, his brush, and his subject. The characteristically vivacious and energetic study was most likely kept in the artist’s studio as a prop throughout his life for use in larger compositions, including his painting of Saint Ambrosius of Milan barring Emperor Theodosius from entering the Cathedral in Milan, painted circa 1615-1617, now in the Kunsthistorisches Museum in Vienna.

Rosso Fiorentino’s The Visitation (est. £500,000 – 700,000) (Old Master & British Works on Paper Sale): This newly discovered 16th century work by the Italian Mannerist painter is an extremely rare example of a chalk drawing by Rosso Fiorentino, and the first compositional study by the artist to appear on the market for half a century. Long thought lost, it is an important and vital addition to the artist’s corpus of drawings. Delicately executed in black chalk, the ten-figure composition was created by Rosso on the request of Aretine painter Giovanni Antonio Lappoli, who had been granted in 1524 a commission for a private altarpiece for the family chapel of the wealthy Aretine citizen, Cipriano d’Anghiari.