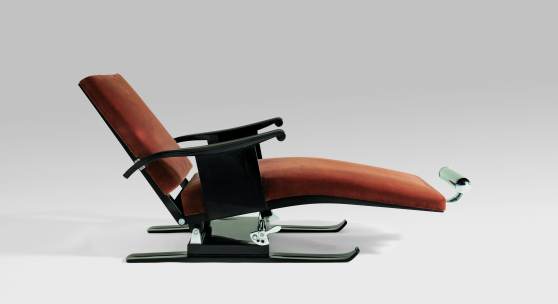 Led by an Important Chaise Longue “aux Skis”
Designed by Ruhlmann for the Maharaja of Indore
Estimate $1.5/2 Million

NEW YORK, 21 November 2019 – Sotheby’s is honored to announce Modern Masters: Chefs-d’œuvre d’une Collection Privée, an evening auction on 11 December in New York that will present extraordinary art and design by top European masters.  This timeless and unparalleled collection is highlighted by rare and superlative works by such artists as Émile-Jacques Ruhlmann, Alberto Giacometti, Marcel Coard, Joseph Csaky, Gustav Miklos, Jean Dunand, Jean-Michel Frank, and Pierre Legrain.  Individually, these luxurious works represent some of the most significant and taste-making innovations in design of the last century, placing them indelibly within the wider context of the Cubist and Modernist Art movements.

Equally important to the intrinsic artistry of this ensemble, many of these works are further distinguished by their impeccable historic provenances, having resided in the collections of some of the most illustrious collectors and artists of the 20th century, including Jacques Doucet, the Maharaja of Indore, Templeton Crocker, Jane Renouardt, Countess Mona von Bismarck, the Duke and Duchess of Windsor, Andy Warhol, Robin Symes, Claude and Simone Dray, Félix Marcilhac, and Tina and Michael Chow, among others.  Collectively, these masterworks speak to the impeccable eye of the connoisseur who so thoughtfully assembled them in pursuit of the very best in artistry, craftsmanship and provenance.

From a rare “Aigle” Vase by Giacometti and a unique Cubist Armchair by Coard, to an important Chaise Longue “aux Skis” designed by Émile-Jacques Ruhlmann for the Maharaja of Indore, this exceptional collection will commence Sotheby’s Design Week auctions and exhibitions, opening to the public in our New York galleries on 7 December.

The Chaise Longue ‘aux Skis’ (estimate $1.5/2 million) was originally designed by Ruhlmann in 1929 as part of a “Studio-Chambre” suite commissioned confidentially by the then-heir to the Indore Kingdom of India, Yashwant Rao Holkar II. The suite was presented that same year at the Salon des Artistes Décorateurs in Paris, without a direct mention of the Maharaja's name. The suite included never-before-seen pieces of furniture, such as the present chaise longue. Based on period photographic evidence, two models are known to exist. The only other known variation to the chaise longue presents with minor variations, namely the absence of lacquer on the armrest and the absence of electric switches controlling the heating system located on the footrest. The whereabouts of this alternate model are unknown, making the present example the only recorded example of the chaise to date.

A testament to its iconic status, the Chaise Longue was classified as a Trésor National, or “National Treasure,” by the French government for many years and could not be transported overseas. In December 2013, a passport was finally issued for the piece by the French authorities, allowing it to be shipped outside of France. More recently, the Chaise Longue was requested by the Musée des Arts Décoratifs in Paris for their ongoing exhibition focusing on the Maharaja Indore, Moderne Maharajah, Un Mécène des Années 30, now on view through 12 January 2020.

The ensemble illustrates a key moment in Ruhlmann’s career in which he sought to reconcile the radically simplified forms of the modern age brought forward by newcomers like Le Corbusier and the more traditional Belle Epoque style that brought him to fame in the early to mid-1920s. This transition is best demonstrated here through the use of new materials like chromium-plated steel and radically dynamic forms. The Chaise Longue itself presents with an adjustable, black-lacquered wood frame; a heated footrest; a side lamp located to the proper right side of the backrest; and the particularly creative use of skis as a base, a device that Ruhlmann used on other pieces from the Studio suite like a bar cabinet and a leather-upholstered armchair. The result is a truly modernist and innovative masterpiece created for an international patron of avant-garde architecture and design.

The collection features an ensemble of important works by Alberto Giacometti, which are the result of an enduring collaboration with the designer and decorator Jean-Michel Frank that lasted over ten years. The work that Giacometti and Frank produced together starting in 1930 put forward a minimalist vision and challenged the prevailing conventions of design and the decorative arts.

Their collaboration led to the creation of spectacular works such as the “Aigle" Vase (estimate $350/550,000), which provides a particularly exciting opportunity for collectors to acquire a rare and large-scale sculptural piece by the artist.