Sotheby's to Offer 1794 Land Charter for First African Free School in America, On View in NYC Through 29 February 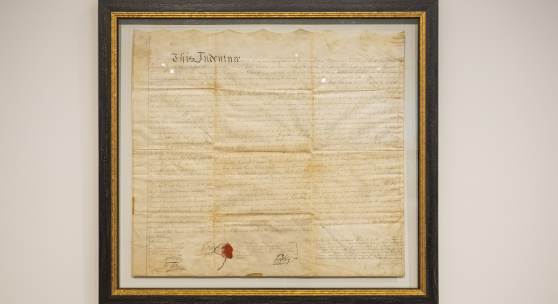 Established by Founding Fathers Alexander Hamilton & John Jay,
The School Was A Progressive Bastion of Democratic Ideals Espoused in the Declaration of Independence

The Document Will be Offered at Auction for the First Time
in Sotheby’s June Sale of Books & Manuscripts in New York,
Estimated to Achieve $250/350,000

NEW YORK, 25 February 2020 – Sotheby’s announces today that the Books & Manuscripts department will offer the 1794 land indenture for the use and benefit of New York City’s African Free School—founded by Founding Fathers Alexander Hamilton, John Jay, and others—marking the establishment of the first such school in America. Making its auction debut at Sotheby’s 24 June Books & Manuscripts sale in New York, the document is estimated to achieve $250/350,000.

The indenture will be on public view at Sotheby’s New York galleries today through 29 February, coinciding with the final week of Black History Month and showcase this integral piece of American civil rights history to the public.

Richard Austin, Head of Sotheby’s Books & Manuscripts Department in New York, commented: “We are thrilled to offer such a unique and historically important document in our upcoming June sale. The African Free School was an amazing symbol of the liberal democratic principles espoused by the country’s framers, and was a truly progressive institution at the time. To highlight the unprecedented achievement of the school and display the document in our galleries during Black History Month is an honor and we hope it will inspire others to reflect on the course of American history and social equality.”

Established by the New York Manumission Society—which was formed in 1785 by some of New York's most elite and influential citizens, including John Jay and Alexander Hamilton—the African Free School was created with the aim, as they perceived it, of educating black children so that they might take their place as equals to white American citizens. As the present indenture states, the school was formed “for the humane and charitable purpose of Educating negro Children to the end that they may become good and useful Citizens of the State.” The mission of the Manumission Society in forming the school was to validate the tenet set forth in the Declaration of Independence just a few years before that "all men are created equal." The Society also felt that education was an essential element in creating a populace capable of sustaining and furthering a democracy.

In addition to Hamilton and Jay, the New York Manumission Society counted luminaries as George Clinton, John Murray, Melancton Smith, and James Duane among its founding members. At a time when slavery was integral to the economic expansion in New York and America, these Founding Fathers and others began their mission of abolishing slavery in the state of New York by protesting the relatively common practice of kidnapping black New Yorkers—slaves and free men and women alike—in order to sell them into servitude elsewhere. The Society also provided legal assistance to free and enslaved blacks who were being abused, and in 1785 successfully lobbied for a law prohibiting the sale of imported slaves in the state of New York—before the state passed a gradual emancipation law in 1799. Slavery was officially abolished in New York State on July 4, 1827.

The African Free School was instituted on 2 November 1787, but was not built until 22 July 1794. Upon the land documented in the present indenture, a single-room schoolhouse was erected in lower Manhattan that would house around forty students, the majority of whom were the children of slaves. The members of the Manumission Society raised funds—or, in many instances, provided the funds themselves—for teachers' salaries, supplies, and, eventually, for the creation of new buildings required to house the growing student population. In 1809, the trustees of the school hired Charles Andrews, and under his ardent leadership the school experienced significant expansion, with enrollment reaching 700 students by the end of his tenure.