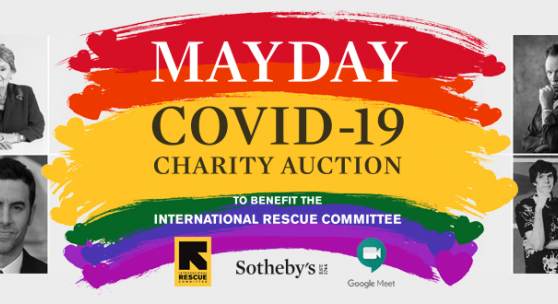 NEW YORK / LONDON, 27 APRIL 2020 – In this time of separation and social-distancing, Sotheby’s and Google are coming together virtually to raise much-needed funds for the International Rescue Committee’s (IRC) work to help mitigate and respond to the spread of COVID-19 in vulnerable communities. Together with leading figures from all walks of culture, business, politics and science, Sotheby’s and Google will launch an online auction of unique experiences which can be enjoyed virtually via Google Meet video calls during this period of social-distancing. From intimate conversations and ‘virtual’ drinks to lessons and tutorials, all of the experiences will be offered without reserve in an online auction open for bidding from 1-8 May 2020. The winning bidders will have the option to share their experience with front-lines workers and others who have been directly impacted by COVID-19 and the social-distancing rules put in place.

The list of experiences continues to grow, but already includes commitments from leading names in music, film, public affairs, art & design and science, among others.

Among them are:
Win a chance to record a song with Sting! You and a friend will virtually join the 17-time Grammy Award-winning artist at his home studio in England to sing one of his many hit songs together. If interested, he will also offer coaching and advice on vocal styling. The result will be a memorable recording for posterity.
A coffee with Hillary Rodham Clinton, former U.S. Secretary of State, U.S. Senator from New York, First Lady of the United States, and longtime activist and advocate, to discuss how the Covid-19 pandemic will change the way in which we view the world and how you can help create positive change amidst this crisis.
A Shakespearian acting lesson conducted by acclaimed screen and stage actor Sir Patrick Stewart, best known for his iconic roles as Jean-Luc Picard in Star Trek and Professor X in the blockbuster X-Men film franchise.
A hangout and conversation with actor/comedian Sacha Baron Cohen to chat about anything from writing comedy to regulating the internet.
Coffee or tea with Madeleine Albright, former U.S. Secretary of State under President Bill Clinton, to discuss her latest book, Hell and Other Destinations, and her reflections on current global issues.
A conversation about music will all five members of The Strokes, whose new album The New Abnormal was recently released and is scaling music charts around the word.
Virtual art work creation with Marc Quinn.
A personal coaching session with Tim Ferriss, entrepreneur, author of five #1 New York Times and Wall Street Journal bestsellers, including The 4-Hour Workweek, and Tools of Titans: The Tactics, Routines, and Habits of Billionaires, Icons, and World-Class Performers, and host of The Tim Ferriss Show podcast.
A virtual visit to famed Highclere Castle, where Downton Abbey was filmed, with the Earl and Countess of Carnarvon, writer and creator Julian Fellowes and actors Hugh Bonneville and Elizabeth McGovern, ‘Lord & Lady Grantham’. Highclere Castle in Hampshire, England is a Grade I listed stately home, seat of the Earl of Carnarvon. The home has famously been used as a location for both film and television for its unique history as well as its unrivalled architecture, beautifully preserved interiors and grounds. Julian Fellowes and stars from the show will join you for the ultimate insider tour of the home of Downton Abbey, delivered online.
A private conversation with Apollo 9 astronaut Russell Schweickart, the first spacewalker of the Apollo program, and co-founder of both the Association of Space Explorers and the B612 Foundation, an organization dedicated to defending Earth from asteroid impacts.
A conversation with David Miliband, former British Foreign Secretary and current President of the IRC.
A discussion about the art of living and decorating with renowned decorator, interior architect and collector, Jacques Grange, from his storied Parisian apartment that once belonged to legendary writer, Colette.

Charles F. Stewart, CEO of Sotheby’s said: “We are proud to contribute to pandemic relief at this extraordinary time.  Many of our clients around the world have enquired about supporting Covid-19 relief efforts and, with the partnership of Google and so many leading figures who have pledged to support this unique auction event of virtual experiences, we are looking forward to supporting the efforts of the International Rescue Committee.”

David Miliband, President and CEO of the International Rescue Committee said: “As a global community we are only as strong as the weakest link in the chain and millions of refugees and displaced people are now facing a double emergency with the virus reaching their communities. With those most vulnerable in need of all the help that we can give, we would like to thank Sotheby’s, Google and all the luminaries who have agreed to participate and donate their time for this auction in support of IRC’s front-line efforts to help stop the spread of Covid-19 in vulnerable communities across the US and Europe.”