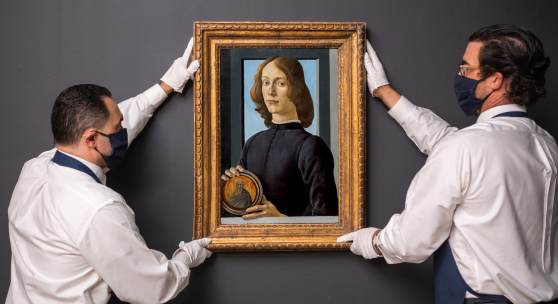 One of the Greatest Renaissance Paintings Remaining in Private Hands

In the popular imagination, no other painter evokes the golden age of the Florentine Renaissance more powerfully than Sandro Botticelli. His Birth of Venus and Primavera are among the most famous works in the canon of Western Art. His nymphs, goddesses, Madonnas and saints populate our imagination as representatives of the rebirth of science, art, and literature in a city that laid the foundation for the modern world. It is in his portraits, however, that Botticelli most clearly opens a window onto the world of Renaissance Florence – never more so than in Young Man Holding a Roundel, a painting that encapsulates the intellectual, courtly and humanistic virtues that define the Italian Renaissance.”
Christopher Apostle, Head of Sotheby’s Old Master Paintings Department, New York

“Portraits are among the most powerful images ever created; they resonate throughout the centuries. Our Young Man is now 550 years old, yet he looks like he could have strolled into our galleries this morning – he is a true beauty for the ages. This is a painting that transcends the normal boundaries of the Old Master genre, and one of the best-preserved, most exquisite, classical Renaissance portraits that anyone could ever wish to own.”
George Wachter, Sotheby’s Co-Chairman of Old Master Paintings, Worldwide

NEW YORK, 24 September 2020 – It was in Early Renaissance Italy that portraits of notable individuals first came to be considered high art. Florentine master Sandro Botticelli was at the forefront of this transformation, depicting his subjects in the second half of the 15th century with unprecedented directness and insight – decades before Leonardo da Vinci painted his enduring Mona Lisa.

Botticelli was celebrated in his own time and sought out, from an early age, by the richest of patrons for commissions that only they could afford. But while he created some of the most arresting and penetrating portraits in the history of Western Art, only around a dozen examples have survived today – with almost all of them now residing in major museum collections.

Sotheby’s will offer one of Botticelli’s very finest portraits, Young Man Holding a Roundel, as the highlight of our annual Masters Week sales series in New York in January 2021. The work is estimated to sell for in excess of $80 million, which will establish it in art market history as one of the most significant portraits, of any period, ever to appear at auction – alongside Gustav Klimt’s Portrait of Adele Bloch-Bauer II (sold in 2006 for $87.9 million) and Van Gogh’s Portrait of Dr Gachet (sold in 1990 for $82.5 million).

Young Man Holding a Roundel is the pictorial synthesis of the ideals, the magic and the beauty of Renaissance Florence where, for the first time since antiquity, the individual and the human figure were at the center of both life and art, and would come to define our understanding of humanism as we know it today. Botticelli was at the vanguard of this movement, and his revolutionary style lead him to be one of the first artists to abandon the tradition of depicting sitters in profile. Yet for all it embodies of the Florentine Renaissance, the painting is timelessly modern in its stark simplicity, bold colors, and graphic linearity.

Young Man Holding a Roundel is comparable in its inventiveness and superb quality with the finest portraits by Botticelli in museum collections, ranking in importance alongside Portrait of a young man with the medal of Cosimo de’ Medici at the Uffizi Gallery in Florence, and Portrait of Giuliano de’ Medici at the National Gallery of Art in Washington, D.C. All these portraits appear to have been executed in the late 1470s / early 1480s, when Botticelli was at the height of his powers and embarking on his series of large-scale mythological and allegorical works that today rank among the most familiar and celebrated images in the canon of Western Art – including Primavera (late 1470s / early 1480s) and The Birth of Venus (mid 1480s), both at the Uffizi Gallery.

The present painting differs from any other portrait of the time in the fascinating way in which Botticelli has shown his sitter holding a small roundel in his hand depicting a saint. This roundel is an original 14th-century work attributed to the Sienese painter Bartolommeo Bulgarini, which was inserted into the panel on which Botticelli painted his portrait. The significance of this striking visual device remains to be decoded, but must relate in some way to the identity of the handsome young nobleman who shows it off so proudly.

While Botticelli’s noble sitters would likely have been well-known to audiences at the time, many of their identities have been lost to history. Though modest and restrained, the young gentleman’s clothing is clearly of the finest quality, and his elegant and contemplative demeanor embody the neo-Platonist and humanist philosophies that defined the culture of the Florentine elite. In the past it has been suggested that he is Giovanni di Pierfrancesco de’ Medici, whose brother Lorenzo was an important patron of Botticelli. Although there is no definitive evidence of this identification, Botticelli did indeed paint portraits of members of the Medici family and their circle.