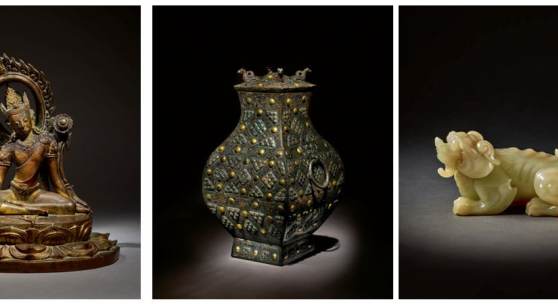 An Exceptionally Rare and Important Gold, Silver and Glass-Embellished Bronze Vessel
That Soared to $8.3 Million Following a 12-Minute Bidding Battle
– TOP LOT OF ALL ASIA WEEK ACROSS NEW YORK –

An Exceedingly Rare Large Yellow and Russet Jade Carving of a Mythical Beast
Achieves $1.7 Million
On Offer from the Esteemed Collection of Stephen Junkunc III
*Over $28 Million Achieved For Works from the Junkunc Collection Since 2018 at Sotheby’s New York*

Formerly in the Collection of Abby Aldrich Rockefeller,
A Gilt Copper Figure of Avalokiteshvara
Sells for $830,700

A Group of Kangxi Porcelain Highlighted by
A Rare Peachbloom-Glazed 'Chrysanthemum' Vase
Sells for $746,000

NEW YORK, 24 September 2020 – Sotheby’s bi-annual Asia Week sale series in New York achieved $36.4 million this week – significantly above the series’ high estimate of $29.1 million, and all sales surpassing their high estimates. Works from this season’s sales were sold to a diverse group of collectors worldwide, highlighted by An Exceptionally Rare and Important Gold, Silver and Glass-Embellished Bronze Vessel, which achieved $8.3 million following a 12-minute bidding battle and was the top selling lot of the week. Below is a summary of the works and collections that drove these results.

Angela McAteer, Sotheby’s Head of Chinese Works of Art Department in New York, commented: “We are thrilled with the results from this week’s sales of Chinese Works of Art. The strong results demonstrated the powerful and continued strength of the Chinese art market, and showcases the extraordinary array of works offered across categories– including Kangxi porcelain; Chinese jades; early ritual metalwork; Buddhist bronzes and more – most of which have not been seen by the market for many decades. We saw active and deep bidding activity across sales, representing a truly international clientele. It was especially exciting to once again hold our Asia Week sales in our New York salesroom, and we look forward to continued success in March next year.”

Anu Ghosh-Mazumdar, Sotheby’s Head of Indian & Southeast Asian Art Department in New York, said: “As we commemorate our 35th year of Indian, Himalayan & Southeast Asian Works of Art sales in New York, we were proud to present a sale of exceptional works, led by a discovery piece - A Gilt Copper Figure Of Avalokiteshvara formerly in the legendary collection of Abby Aldrich Rockefeller and emerging for the first time in nearly a century. We are delighted that this masterpiece will now occupy pride of place in a distinguished private collection. Throughout the sale, we saw active bidding from across the world, and yesterday’s success indicated the market’s support for high quality artwork.”

The exquisite collection of Kangxi porcelain kicked off Asia Week with a thrilling start, as the first three works offered each generously exceeded their high estimated by multiple times, and saw deep bidding activity for each lot. The auction achieved $4.5 million – exceeding its high estimate of $3.1 million.

The group was led by A Rare Peachbloom-Glazed 'Chrysanthemum' Vase, which fetched $746,000 – nearly five times its high estimate of $150,000. Known as juban ping, 'chrysanthemum petal vase', this piece is remarkable for its well-balanced form and delicate rose-pink glaze. The technological and artistic advances created during the Kangxi reign at the imperial kilns in Jingdezhen are illustrated in the present vase. Of all the innovative forms developed in the Kangxi period, chrysanthemum vases were perhaps the most influential, as they inspired the numerous chrysanthemum-shaped vessels of the succeeding Yongzheng reign.

A selection of more than 60 jades on offer from the renowned collection of Stephen Junkunc, III achieved $6.3 million, surpassing the auction’s $5 million high estimate. The sale marks the continued success of the Junkunc Collection, which has raised over $28 million across Sotheby’s auctions since 2018.

Following an eight-minute bidding battle, an exceedingly rare Large Yellow and Russet Jade Carving of a Mythical Beast realized $1.7 million – more than five times its high estimate of $300,000. Outstanding for the playful yet dynamic rendering of the mythical beast and its impressive size, this carving successfully captures the supernatural vitality of the creature. The notched spine and muscular body which is poised as though ready for action, along with the pronounced eyes and curled features such as its beard, tail and ears, display the technical expertise of its carver. Highly tactile in its smooth finish and impeccably modeled in the round, this carving would have been particularly favored by the jade connoisseur.