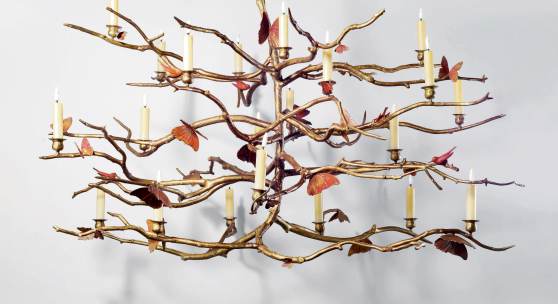 Additional highlights include a Rare “Snowflake” Ceiling Light by Finnish designer Paavo Tynell (estimate $40/60,000). Tynell created the first iteration of his beloved “Snowflake” ceiling lights in 1946, for which he drew inspiration from the traditions of his native country. Around Yuletide, it is common to hang himmeli, decorative and geometric mobiles made of straw that portend productive crop growth in the new year. Tynell adapted this concept with his metalsmithing experience, replacing straw with brass to create uniquely whimsical and wintery lighting. The present lot is an example of model 10109, a rare configuration of 24 snowflakes designed circa 1950.

A highly Modernist offering of a complementary Desk and Stool by Pierre Chareau, one of the undeniable masters of French Art Deco, rounds out the mid-century chapter (estimate $180/240,000). Among the designer’s most coveted forms, the works embody the essence of Chareau’s avant-garde sensibility through the combination of variegated rosewood and painted iron surfaces. The desk and chair were exhibited in the seminal exhibition Pierre Chareau Architecte, un Art Intérieur at the Centre Georges Pompidou in Paris in 1993-1994.

Opening the sale is an extraordinary selection of Thomas Molesworth furniture from the Lazy Bar F Ranch near Cody, Wyoming. This group was originally commissioned by Max Wilde, a well-known ranger and an ardent conservationist, and remained at their original location for over 85 years after they were made. Exhibiting Molesworth’s characteristic burled wood, colorful leathers and dynamic Chimayo weavings, this exceptional group presents a variety of iconic forms from desks, tables and lamps to quintessential seating with vigorous burled legs. The curated selection on offer this December features early and unique pieces designed by Molesworth, and exhibit his timeless, signature style that inspired an entire generation of Western vernacular furniture design. Highlights from this diverse group include: an Octagonal Lamp Table (estimate $25/35,000), a Unique Slant-Arm Club Chair (estimate $40/60,000), a Unique Two-Seat Sofa (estimate $40/60,000), a Chandelier (estimate $15/20,000), and a Pair of Table Lamps (estimate $15/20,000).

A strong selection of American Studio design is led by Paul Evans’s “Sculpture-Front” Sideboard, a superb and highly sculptural example of the artist’s  most seminal series, on offer from the collection of Gustave and Helen Manasse (estimate $150/200,000), former owners of the legendary Le Figaro Café in New York’s Greenwich Village, who became enamored with Evans’s work in 1967.

Wendell Castle’s Important Two-Seater Settee (estimate $200/300,000), one of only three examples of the model made by the designer, further distinguishes the group. Describing the work, curator and writer Glenn Adamson said: “the settee offered here is among [Castle’s] most impressive works…its stepped construction (the famed stack-lamination technique) arranged into a gentle downward flow. The bucket-shaped seats, shapes that Castle had employed since the 1960s, indicate his indebtedness to midcentury design. The present lot is a variant of the model presently held in the collection of the Museum of Fine Arts, Boston, executed that same year. Both models are adaptations of an earlier form, the "Metropolitan" Settee made in 1973 for Gannett Co. Inc. and now in the collection of the Metropolitan Museum of Art in New York.”

Outstanding examples of Contemporary Design are led by Joris Laarman’s “Leaf” Table from 2010 (estimate $200/300,000) – a sleek yet elegant work that unites Laarman’s celebrated craftsmanship and digitally-enhanced techniques. This exciting offering represents the debut of Laarman’s “Leaf” series at auction.

Leading the sale are a selection of naturalistic lamps including a superlative example of the iconic “Wisteria” Table Lamp (pictured right, estimate $400/600,000), a rare “Butterfly” Table Lamp (estimate $80/120,000), and a sublime Rare “Woodbine” Chandelier (estimate $200/300,000), each of which are a testimony to Tiffany’s unparalleled artistry and glassmaking skills. Further highlighting the sale are early works by Tiffany, including a balustrade section from the historic Havemeyer House (estimate $80/120,000), and an extremely rare twisted wire and blown favrile glass table base paired with a “Tyler” shade from the Collection of Sandra Moss (estimate $100/150,000). The auction’s blown glass offerings feature an early, award-winning “Morning Glory” Vase from the collection of Leslie Nash which was exhibited in the 1910 Paris Salon (estimate $20/30,000), as well as an outstanding example of the later iteration of the model which showcases the firm’s mastery of glassblowing.

A Celebration of Art Deco: Masterworks from the Collection of Dr. Stephen E. Kelly Day Sale
Live Auction 10 December at 10AM EST