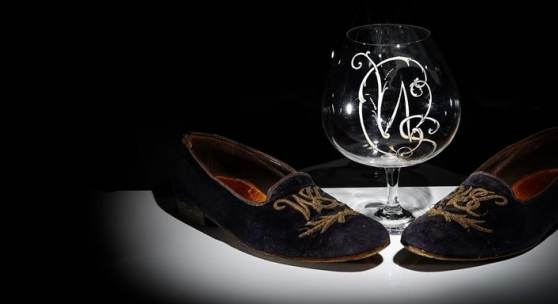 Bellmans is offering the rare chance to bid for two lots that once belonged to Sir Winston Churchill - his monogrammed midnight blue velvet evening slippers from the 1950s and a monogrammed brandy balloon from circa 1960. Both lots were sold for the first time by Churchill's family in the Political Sale at Sotheby's on the 15th July 1998, where the present owner purchased them.

He is now offering them for sale through Bellmans and reflects: "I have always been a huge admirer of Sir Winston Churchill and when Sotheby's held their first political sale in 1998, I couldn't resist bidding for a couple of lots. I put in successful bids for his slippers and the brandy balloon and it was a remarkable feeling to hold them in my hands after the auction. Although I am sad to part with them now, I hope that they will be bought by someone who cherishes these items as much as I did. I often imagined the great man sitting in his chair with these slippers on and this very glass filled with brandy in his hand. You can't really beat that."

The slippers have leather soles and are 29cm long, Albert style, and embroidered in raised gold thread with the initials WSC, leather lined and stamped N. Tuczek, 17 Clifford St, Bond St, London. They are estimated at £10,000-15,000. Sir Winston Churchill's brandy balloon, with large tulip shaped bowl decorated in white enamel with monogram WSC, is signed 'E Pope' and 21cm high. It is expected to sell for £7,000-10,000. Bidders always find Churchill memorabilia exciting, anything with a direct link to the man who led Britain to victory in the second World War usually results in a bidding war, no matter what the item may be.

Julian Dineen, specialist in charge of the sale says: "We are delighted to be offering these two lots for sale which once belonged to Sir Winston Churchill. Both his paintings and personal property have risen considerably since that Political Sale in the late 1990s. It is only the second opportunity to acquire these wonderful Churchilliana and we therefore expect there to be significant interest."

The auction will take place on Tuesday, 9th March (subject to government guidelines) and further information and the catalogue will be available online at www.bellmans.co.uk.​ Bellmans is holding sales from 9th to 12th March and then from 13th to 16th April 2021.