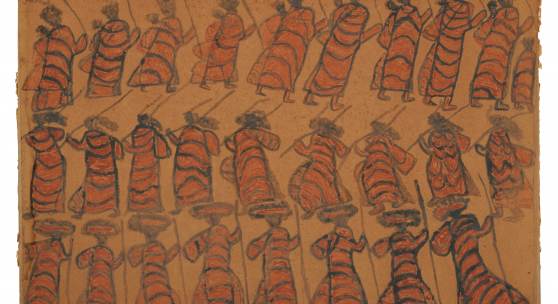 With Largest & Most Significant Auction Ever Staged Outside Australia

Highlighted by a Never-Before-Seen Work by Legendary Australian Artist William Barak, Which Has Remained in Private Collection of de Pury Family for 125 Years

“The past two and a half years since our last live auction of Aboriginal art have seen a growing international focus on indigenous art and artists from Australia, including several important museum and gallery exhibitions. To return to New York with our most significant auction of Aboriginal art ever staged outside Australia, and to have it take place shortly following the marquee sales of Contemporary and Modern Art, is a landmark moment in presenting Australian art to a global audience of collectors.” Timothy Klingender, Sotheby’s Senior Consultant for Aboriginal Art

NEW YORK 4 May 2022 --- For the first time since 2019, a live auction of Aboriginal Art returns to Sotheby’s New York this May, closely following Sotheby’s spring marquee sales of Contemporary and Modern Art. Featuring more than 100 lots, comprised of works by many of the leading historic Aboriginal artists, such as William Barak, Emily Kame Kngwarreye, Ronnie Tjampitjinpa, Willy Tjungurrayi, and Mick Namarari, among others, the auction will take place live from New York on 25 May.

Featured among the sale highlights is a never-before-seen work by legendary indigenous Australian artist William Barak, whose work documents Wurundjeri Woi Wurrung culture and speaks to the survival of First Nations’ traditions in defiance of colonization. Many of Barak's paintings, drawings, carved weapons, and tools survive today because of his strong friendships with settlers who arrived in Kulin Country in the second half of the nineteenth century. Corroboree (Women in possum skin cloaks) and Parrying Shield are exceptional examples of this, as they were acquired directly from the artist in the 1890s by Jules de Pury, a member of a local Swiss family with whom Barak established a strong friendship and would remain within the de Pury family collection until now. The emergence of these two important works that had previously never before been exhibited in public is a major event in Aboriginal art and Australian history.

Ordered chronologically the catalogue reflects the dynamic and diverse nature of the artworks produced by the Australia’s First Nations, the world’s oldest continuous culture. The sale commences with twenty lots on offer from a major American Private Collection, six of which have been on permanent display in the Michael Rockefeller Wing at New York’s Metropolitan Museum from 2012 until 2020, consisting of rare 19th century shields and other weapons to sculptures and bark paintings from the mid-20th century. The sale illustrates the story of the ‘renaissance’ that took place beginning in the 1970s until the present with Contemporary Australian Indigenous Art, ranging from the ‘Desert Masters’ such as Emily Kame Kngwarreye, Mick Namarari and Ronne Tjampitjinpa to the current generation of activist artists Vernon Ah Kee and Richard Bell.

The Contemporary works are led by Alhalkere—Old Man Emu and his Babies by Emily Kame Kngwarreye, a pivotal work by the celebrated artist; Mick Namarari’s Untitled (Artist’s Grandmother’s Country), a landmark work of Aboriginal art that previously set an auction record for Aboriginal art; and a number of significant works on offer from notable collections, including celebrated actor, comedian, and musician Steve Martin, the Estate of Sir James (Jim) Wolfensohn, former Head of the World Bank, and the Dutch Collection of Thomas Vroom, Europe’s trailblazing collector of Contemporary Aboriginal Art.

Prior to the live auction on 25 May, a pre-sale exhibition at Sotheby’s York Avenue galleries will be on view 21 – 24 May.