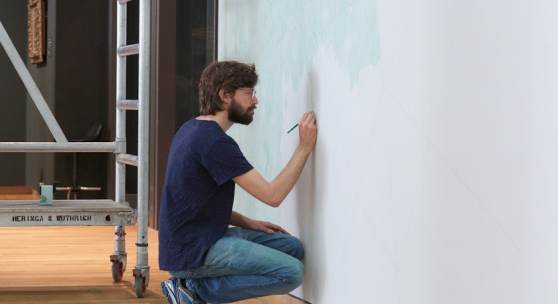 The exhibition When I Give, I Give Myself features 23 national and international contemporary artists and writers who have all created artworks in response to specific sections from letters by Vincent van Gogh. Their paintings, drawings, sculptures, installations, letters, poems, photos and videos show how Van Gogh is still a source of inspiration until this very day, 125 years since his death, and that his ideas are still relevant. The works will be exhibited in combination with Van Gogh’s paintings, drawings and letters from the permanent collection of the Van Gogh Museum, from 20 May 2015 to 17 January 2016.

Van Gogh a source of inspiration, even 125 years after his death
Van Gogh wrote more than 800 letters, the majority addressed to his brother Theo. In his letters he not only voiced his ambitions and doubts, but also everything that inspired and amazed him in the world around him. Van Gogh’s ideas about art and life are inextricably connected with his work. He wrote to encourage himself, to express his doubts and to keep them under control. Guest curator and artist Henk Schut intensively studied Van Gogh’s letters and he became impressed, not only by their depth and the amount of self-reflection, but also by their relevance for artists today. Schut recognized the similarities between the themes in Van Gogh’s letters - such as death, (lack of) success, light, colour, isolation, the importance of literature, the empty canvas – with those of contemporary artists and their work.

Schut sent 23 artists and writers a letter by Van Gogh especially selected for each one of them and he invited them to respond to this letter. This has resulted in a surprising affinity between Van Gogh’s ideas and themes on the one hand, and contemporary art and literature on the other hand. Anish Kapoor, for instance, has focused on the intrinsic value of colour, Job Koelewijn on the importance of literature, author Nicole Krauss on the fear of the empty canvas, Viviane Sassen on Van Gogh’s fascination for complementary colours, Alicia Framis on his loneliness, Navid Nuur on his struggle with the natural urge to paint, Simon van Til has centred on his love for the moon, Diego Tonus on his compulsive letter writing, Cheng Ran on his need for interaction and Rory Pilgrim has concentrated on Vincent’s aim at making the world a better and more beautiful place. When I Give, I Give Myself reveals how contemporary artists reflect on the same artistic and existential questions that Van Gogh asked himself, and it reveals that Van Gogh - even 125 years since his death – is still relevant and a source of inspiration today.

Open call for art students
Similarly as was the case with Van Gogh, art students need to develop and reflect upon their own work. How do they look upon this process, what does it mean to them to be a novice artist? By means of an open call, students of art or culture are invited to submit a proposal for an artwork in response to a letter by Vincent van Gogh. Applications should be received no later than 22 October. The winning artwork will be included in the When I Give, I Give Myself exhibition from December onwards.

Friday Nights, publication and short docs
Van Gogh’s works and letters can also inspire visitors during the Friday Night Programme. On Friday 29 May a talk-in will be organized with guest curator Henk Schut, and on Friday 18 September the programme offers performances, live music and lectures. A catalogue with all the works shown in the When I Give, I Give Myself exhibition will be published with an accompanying text by Hans den Hartog Jager. The artists will talk about their work in short documentaries. The Gieskes-Strijbis Fund has sponsored the realization of the exhibition and part of the additional educational programme. For the complete programme, an overview of the 23 artists and all their works and videos, please, see www.vangoghmuseum.com/when-i-give.


The final touches by Wouter Venema on his artwork in 'When I Give, I Give Myself'. Photo: Ernst van Deursen.
Van Gogh Museum