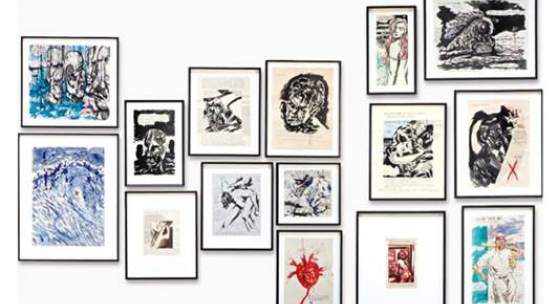 NEW YORK, 2 February 2017 – Sotheby’s S|2 is pleased to present Raymond Pettibon: Four Decades, a selling exhibition in our New York gallery space featuring the artist’s iconic works on paper. On view from 2 February – 17 March 2017, the exhibition showcases many of the familiar and reoccurring characters and motifs from Pettibon’s career, including surfers, trains, baseball players and femme-fatales. The exhibition coincides with the February opening of The New Museum’s Raymond Pettibon: A Pen of All Work, the first major museum survey of the artist in New York.

The S|2 exhibition explores the unique world of Raymond Pettibon - one born out of popular culture, the counterculture in its multiple forms, politics, sports, voyeurism, religion, nostalgia and a sense of failed heroic identity. The backdrop for Pettibon's world is the greater global American landscape and the characters who inhabit it are either real or appropriated from real life. This world is neither enlightened nor demonized, but rather put under the interrogation lamp to secure a clearer understanding of self. It is Pettibon’s ability to blend his prose and image together, both unique and borrowed, that creates this new universe which so closely mimics our own. Although on the surface the artist’s work may seem pessimistic or even nihilistic, there is a feeling that through the darkness a new profound understanding of self can be discovered, and with that a glorious truth. The works set forth in Raymond Pettibon: Four Decades demonstrate the ways in which the artist has stepped out into the world of Contemporary Art and challenged perceptions of what our real identity might be, for better or worse.