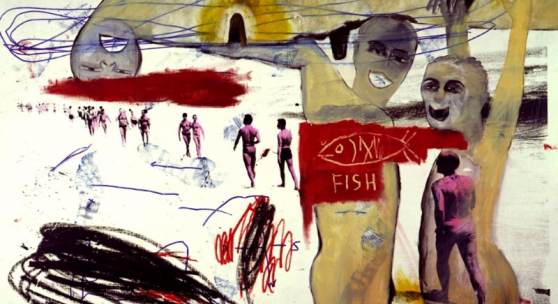 For Frieze Masters 2017, Galerie Thaddaeus Ropac presents memorable works from the year 1984. The exhibition seeks to contrast the artists’ reflection of the reality of the era with the dystopian vision foretold in George Orwell’s eponymous novel, predicting as it does a world in which despotic totalitarian regimes suppress all individuality & independence, a monochrome, micro-managed proletariat ruled over by remote sinister dictators. Orwell’s nightmarish vision was of a world in which all creative endeavour was annihilated.

In truth, the emergence of neo-liberal political theory in the 1980's saw a decade of meteoric economic growth in the West whilst the art world witnessed an era of startling creativity. The 1980’s was the decade that started with the death of Mao, the end of the Cultural Revolution and the emergence of capitalism in China before ending with the collapse of the Soviet Union and all of its satellite states; two revolutions that have done more than any other to determine the shape of the world in the first two decades of the 21st century. In short, Orwell got it wrong. The 1980’s was the decade in which, for a few glorious moments, it seemed as though good might actually triumph over evil, that democracy & freedom would prevail over the dark forces of totalitarianism, that the rising tide of capitalism would lift all boats.

After an era in which creative attention had been largely focused on austere, performance and conceptual art that was remote and difficult to comprehend, a new generation of artists emerged who reflected this great optimistic surge: exuberant, liberated, excessive, materialistic. In the UK specifically, 1984 marks the year in which the Turner Prize was inaugurated, the event which has done more than any other to symbolise the British public’s growing fascination with and love for contemporary art.

Early sculptures by Tony Cragg, Richard Deacon and Antony Gormley converse with the socially engaged work of Joseph Beuys and the neo-expressionism of Georg Baselitz. In all the works, figurative and metaphoric imagery often appear together with poetic or evocative titles. The larger-than-life anti-hero in Georg Baselitz’s Der Bote (The Herald) recalls the New Types and Heroes series, which dominated his work in the post-war context of the mid-1960's. Heralding a newly defined condition for painting towards the end of the 1970's, Baselitz’s range of exuberant brushstrokes created an intense mix of past, present, and future. In 1984, Joseph Beuys combined two previously distinct works to form Badewanne für eine Heldin (Bathtub for a Heroine). One of the pieces is made from an electric device on a copper cast mammoth tooth, the other consists of a bronze cast of a female torso merged with an element of industrial piping. The female figure stands like an image of victory or a fertility goddess, expressing spiritual power and strength. The combination of black, white and red is a definitive characteristic of Emilio Vedova's œuvre. In Rosso ‘84 (Red), this polarization is enhanced by a constant interplay of painterly gestures which enunciate the existential awareness of his critical stance. Although abstract, the artist remains at the core of the painting, the dimensions of which is always in accordance with his own body. In the mid-1980's, Antony Gormley became interested in working in a direct way with materials that would take immediate impressions of touch. Favouring lead for its moulding qualities, he uses his own body as the starting point to express universal human experience. For him, the body as the container or seat of consciousness becomes the means of articulating the unknowable and unseeable. In the iconic 30-part Gilbert & George work Three Ways, 1984 three East end lads stand in heroic poses in front of a back drop of silver leaf and winter berries. Nominated for the Turner prize selection in 1984, their unique way of art making was to make themselves into sculpture, so sacrificing their separate identities to art and turning the notion of creativity on its head.