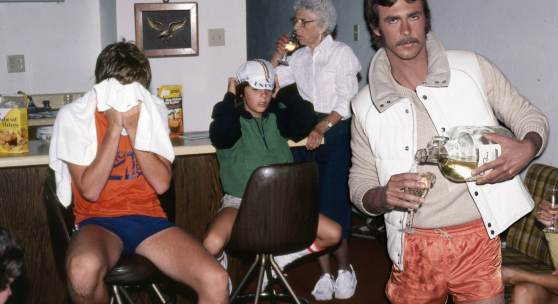 In Recollections in America, photographer David LaChapelle utilizes a unique production process in which he builds “neo-collages” from acquired photographs taken during intimate family gatherings in America during the 1970-1980’s. By introducing additional objects and people, which otherwise have nothing to do with the original images, the artist creates dystopian retrogrades. Preventing the viewer from discerning the original snapshots from the re-imagined, the nuanced manipulations (flags, firearms, slogans and other signs of American power) act to heighten the symbolism, and inherent contradiction of the American “Dream” already present in the source period photographs.

Collectively, the two bodies of work touch on the collective American consciousness and the continuity between past and present created from analogies and inconsistencies.

Developing the theme of portraits of American culture and lifestyle, Joseph Rodriguez invites us into the streets and homes of New York’s Latino district, Spanish Harlem.

Joseph Rodriguez has gained worldwide recognition for his intimate portraits of American and global subcultures taken over the past four decades and his series on Spanish Harlem has received much acclaim. Taken throughout the latter half of the 1980s, the images reveal the community and family spirit at the heart of this troubled neighbourhood. Despite the presence of crime and violence never being far away, Rodriguez rejects a primary focus on poverty in favour of creating dignified portraits of the struggling area’s inhabitants, capturing moments that show residents playing card games, listening to boomboxes and dancing in the street.

This series would not be possible were it not for the intimacy and access that Rodriguez was granted by his subjects. Following a brush with drugs and crime as a minor, Rodriguez turned to photography to get him back on the straight and narrow. The empathy that he shares with his subjects is exceptionally powerful. Rodriguez’s Spanish Harlem allows us to walk through the troubled neighbourhood at a time when people wouldn’t dare enter, and understand the essence and struggles of New York’s mecca for Puerto Rican American culture. In 2017, a monograph was published by powerHouse under the title Spanish Harlem : El Barrio in the ‘80s.

The pairing of David LaChapelle’s Recollections in America with Joseph Rodriguez’s Spanish Harlem provides candid portraits of American people and their environments throughout the ‘70s and ‘80s. In an observation of two very different social spheres within society, they address a collective consciousness, whilst exposing the diversity and eccentricity of life in America over these two decades.

A selection of works from both Recollections in America and Spanish Harlem series will be presented by Galerie Bene Taschen at the international art fair Art Cologne (stand #A-006). David LaChapelle (b. 1963) attended high school at North Carolina School of the Arts before moving to New York in the mid 1980’s. He began showing in East Village galleries and soon after was offered a job by Andy Warhol to work at Interview magazine. With his unique approach to image making and groundbreaking vision, the photographer expanded the genre of photography through his widely recognizable staged pictures. By 1991, The New York Times predicted “LaChapelle is certain to influence the work of a new generation...in the same way that Mr. Avedon pioneered so much of what is familiar today.”