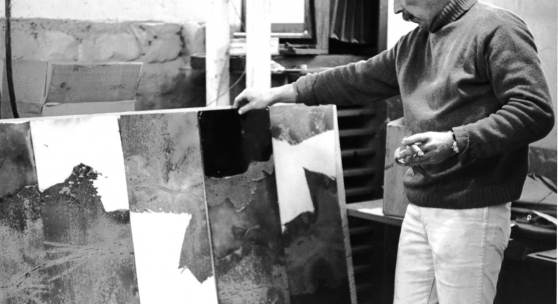 Moderne Gallery - The Showrooms at 2220

Philadelphia, 26th May 2021 - Philadelphia’s Moderne Gallery has announced an exhibition this summer that will celebrate the legacy of Paul Hultberg, the first large-scale exhibition of work by this multi-disciplinary artist since his death in 2019. While he may be a lesser-known figure of The Studio Craft movement, in recent years Hultberg has been attracting acclaim as one of the most progressive artists working in enamel in the mid-twentieth century. While he originally trained as a painter, Hultberg began experimenting with enamels in the 1950s, eventually developing his own abstract style that paralleled what many of his peers were doing with paint and canvas in this period. Over the following decades, Hultberg mastered his techniques and became renowned for his large-scale architectural and public works. Rediscovering Paul Hultberg (1922-2019): Abstract Expressionism in Enamel will showcase the full breadth of the artist’s storied legacy showing both his pioneering work with enamel as well as a collection of early prints and drawings and later portraiture works on canvas.

“Hultberg’s work showcases a deep appreciation for craft and material. While enamel work is often underappreciated, Hultberg’s catalogue of pieces, from small to large, demonstrates a unique understanding of material born from decades of study and experimentation. The past few decades have seen Hultberg’s work surpassed in popularity by his many contemporaries but we’re seeing now a real appetite to explore the history of craft in America and the moment feels right to give Hultberg the recognition he very much deserves” - Robert Aibel, Founder and Co-Director of Moderne Gallery.

Curated in collaboration with Hultberg’s son, Lawrence, Rediscovering Paul Hultberg features a number of significant works from Hultberg’s career including several 12” x 12” works that featured as part of the artist's solo exhibition at the Museum of Contemporary Crafts (now Museum of Arts & Design) 1966 in 1966. This series of works on copper is a perfect example of Hultberg’s ability enamel to make unique abstract expressionist works in a medium that had long been associated with craft. In fact, Hultberg’s intimate knowledge of the particular properties of enamel, led Hultberg to successfully express the spirit of abstract expressionism in an unexpected medium. Alongside these works, a number of pieces from later in Hultberg’s career showcase the artist’s experimentation with bolder colours and new techniques.

“The exhibition has been designed to give a comprehensive understanding of Hultberg’s work - from early drawings through to important works like Dallas Diptych and Hieroglyph we wanted to tell the story of not only Hultberg’s career in enamel but also his incredible legacy as a seminal figure in the abstract expressionist movement in America. This is also the first time we have had the opportunity to take full advantage of our new gallery space after moving in late 2019, and as we launch our new website and virtual exhibition it’s an exciting time for Moderne Gallery. We’re incredibly honoured to be able to enter this new chapter with such an important exhibition” - Joshua Aibel, Co-Director of Moderne Gallery

Alongside the exhibition, Moderne will publish an in-depth catalogue of the works shown and including two essays about Hultberg’s life and works from design scholar Alan Rosenberg and curator and writer Glenn Adamason.

In his essay, Adamson ponders; “Why is Paul Hultberg not much better-known today? Given the evident seriousness and quality of his work, and the privileged position he had at the beating heart of the American avant-garde, it is difficult to understand his relative obscurity. The most obvious explanation is medium: for all his intelligent engagement with contemporaneous painting, his chosen discipline of enamel seemed to occupy a space apart. Like many other artists associated with the postwar craft movement – ceramists like Voulkos and Takaezu, weavers like Tawney, and the other great enamelist of his generation, June Schwarcz – he found himself categorized within a “minor art” genre”. Paul Hultberg

Born in 1926 in Oakland, California, Hultberg moved to Mexico City in the late 1940s after studying at the University of Southern California under abstract landscape watercolorist Keith Crown. In Mexico City, he studied at the Instituto Politécnico Nacional with Jose Gutierrez, a renowned muralist who had worked in the studio of David Alfaro Siqueiros. Here, Hultberg and the other students worked alongside a chemist, making their own paints, and experimenting with new synthetic resins and acrylic emulsions before they had reached the commercial market. During this period, Hultberg was influenced to look for a medium that could be used for building exteriors, would withstand outdoor conditions, and create beauty in public spaces and through this experimentation, Hultberg began working with enamels on copper and steel.

Hultberg then moved to New York in the early 1950s where he studied and taught at the Brooklyn Museum School. It was also during this time that Hultberg began showing his work in galleries including Zabriskie Gallery while some of his earlier prints were acquired by MoMA for their traveling shows. This period is also when he began experimenting with large-scale enamel works, creating murals of an architectural scale.