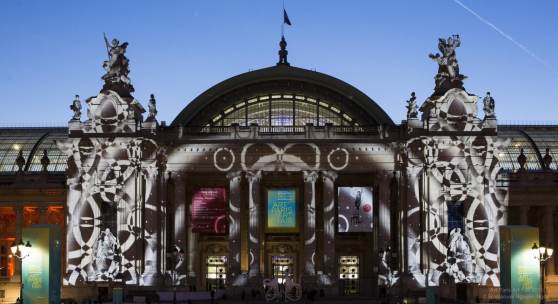 Held at the Grand Palais from 31st March to 3rd April 2016, Art Paris Art Fair is the springtime Paris event for modern and contemporary art that brings together 143 galleries from 20 countries which includes for the first time Azerbaïdjan, Colombia and Iran.

A generalist fair open to all forms of artistic expression including design, Art Paris Art Fair presents an overview of art from the post-war period to the present day. The thematic sections focus on discovery in particular with this year’s Korea guest of honour project, personal exhibitions in the Solo Show section, emerging talents with the Promises section for young galleries and digital art with monumental projections on the façade of Grand Palais.

Exploring the regions of Europe
Art Paris Art Fair continues to attract leading international galleries such as Daniel Templon (Paris), Sundaram Tagore (New York, Hong Kong, Singapore) and Flowers (London, New York). The 2016 selection is particularly focused on exploring the different regions of Europe and its cities, each with their own individual identities such as Zurich, Munich and Milan. Their galleries have an artistic vision which reflect passion and commitment, like an antidote to the prevailing uniformization seen in so many art fairs.

Focus on the East: South Korea guest of honour
Under the leadership of guest curator Sang-A Chun, the invitation of South Korea as guest of honour highlights the vast wealth of the art scene from the “Land of Morning Calm”. With close to 80 artists represented by 8 galleries both from Korea (Seoul, Daegu and Paju) and some 26 Western galleries, this project spans the emergence of very specific forms of contemporary art from the 1960s to the present day boom in creativity.

The first generation of modernists is represented with artists such as Ungno LEE, a historic figure who produced an innovative body of work at the crossroads between Eastern and Western traditions, shown by Galerie Thessa Herold in a personal exhibition. Others include masters of Dansaekhwa, the mysterious Korean art of monochrome painting, such as Lee Ufan and Myeong-Ro Youn represented by Gana Art gallery. Also on show are some of the leading figures of the contemporary scene such as Moon- Pil Shim (Galerie Lahumière and Shilla Gallery), Lee Bae (Galerie RX), Kwang Young Chun (Sundaram Tagore Gallery and Omer Tiroche Contemporary Art) and Boomoon (Flowers Gallery). The young generation of emerging talents is well represented with for example installations by Kiwon Park (313 Art Project) and Yun Soo Kim (Soso Gallery), the dreamlike sculptural creations of Myeongbeom KIM (Galerie Paris- Beijing) or the delicate graphic work of Min Jung Yeon (Galerie Maria Lund).

As part of the celebrations of France-Korea year, exhibitions and installations of Korean art will be visible throughout the capital during Art Paris Art Fair. IBU Gallery, in collaboration with RX and Hakgojae galleries, present “Standing Man” by CHUNG Hyun, a group of 47 monumental sculptures in the garden of the Palais Royal. The Cernuschi Museum is organising an exhibition of contemporary Korean art from the 1980s onwards along with a number of new rising talents. The Korean cultural centre dedicate an exhibition of the painter Oh Se-Yehol and is hosting a talk entitled “Contemporary Korean art: exploring the past and shed light on the present,” moderated by Art Paris Art Fair Korea Guest of Honour curator Sang-A Chun. (Korean Cultural Centre, 2 avenue d’Iéna, 75116 Paris – Friday 1st April, 6pm).